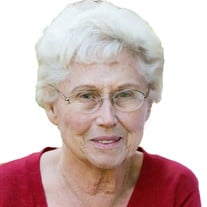 Louise M. Burnett, 86, of Nora Springs and formerly of Rudd, passed away peacefully Thursday, April 8, 2021 at the Nora Spring Care Center. Funeral Services will be held 11:30 am Monday, April 12, 2021 at the Rudd United Methodist Church, 611 6th Street, Rudd, IA with Rev. Sue Simmons officiating. Louise will be laid to rest at Evergreen Cemetery in Rudd. A Livestream of the services will be found here: https://www.facebook.com/HoganBremerMooreColonialChapel/ Visitation and viewing will be held from 10:00 a.m. until the service at the church. Memorials in Louise’s honor may be directed to the Rudd United Methodist Church or the Nora Springs Care Center. Louise Mary Ballhagen was born May 3, 1934 on the family farm near Rudd, the daughter of Raymond and Mary Ellen (Jacobs) Ballhagen. Growing up on the farm, Louise attended Rudd Schools. On August 6, 1950 she married Louis “Boyd” Burnett at the Rudd United Methodist Church. Boyd’s service in the United States Air Force took the couple to San Fransico, CA and later Texas. The couple was blessed with two children, Daniel and Carolyn and the family soon made their home back in Iowa. For a while Louise worked at Modeday in Mason City. Then in 1961 Louise graduated from LaJames College for Cosmetology and opened Lou’s Beauty Salon in her home. Together with Boyd, the family farmed north of Rudd. Louise was a true caretaker and servant to others. She loved to cook and bake, sharing her many skills with friends and family. Her family would say, “She was the only woman we knew that could prepare a five course meal in a matter of 20 minutes”. She and Boyd loved roller skating, dancing on their skates around the rink, and later in life, enjoyed square dancing with the Twisters dance club. The Ballhagen family was honored with a Century Farm award, something Louise was proud of. For 22 years Boyd and Louise were able to winter in Arizona, where they made countless friends. They were longtime members of the Rudd United Methodist Church where Louise taught Sunday School for several years; as well as a part of the Royal Neighbors and longtime Farm Bureau Members. Those left to cherish her memory are her son Daniel (Becky) Burnett of Floyd, daughter, Carolyn (Don) Ewen of Rockford; grandchildren, Tonya (Andy Reed) Obermire of Mason City, Jessie (Jason) Reicks of Rockford, Brian Burnett of Brooklyn Park, MN, Heather (Jamie) Lechtenberg of Stewartville, MN, Cole (Ada) Ewen of Elsberry, MO; great-grandchildren, Elise (Adden Swenson) Obermire, Ethan Obermire, Haleigh, Gavin, and Paetyn Reicks, Samara Burnett, Lincoln Bondhus, Tyler and Alexa Lechtenberg, Leora Marshall and Newt Ewen; great-great granddaughter, Veda Swenson; sister, Ruth Cook; brother, Royal Ballhagen; brother-in-law, Rodney (Marge) Burnett; as well as numerous nieces, nephews and extended family members. Greeting her in Heaven are her beloved husband, Louis “Boyd”; her parents; grandparents; brother, Harold and Jackie Ballhagen; brothers-in-law, Lyle Cook and Duane and Shirley Burnett; and a grandson-in-law, Dan Obermire. Sheckler Colonial Chapel. 114 N. Hawkeye, Nora Springs, IA 50458. (641) 749-2210. ColonialChapels.com

The family of Louise Mary Burnett created this Life Tributes page to make it easy to share your memories.

Send flowers to the Burnett family.