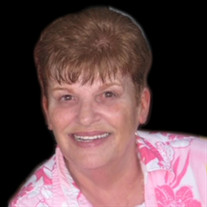 Louetta Jean Best, 76, of Clear Lake died Monday, August 30, 2021, at Oakwood Care Center under hospice care in Clear Lake after bravely battling cancer over the last year. A Mass of Christian Burial will be held at 10:00 a.m. Saturday, September 4, 2021, at St. Patrick’s Catholic Church, 1001 9th Ave. S., Clear Lake with Rev. Josh Link officiating. Burial will be at Clear Lake Cemetery. Visitation will be held from 5:00-7:00 p.m. Friday, September 3, 2021, at Ward-Van Slyke Colonial Chapel, 310 1st Ave. N., Clear Lake, where a Scriptural Wake Service will begin at 6:45 p.m. In lieu of customary remembrances, please consider donation to MercyOne North Iowa Hospice. Louetta “Lou” was born May 10, 1945, the daughter of Clifton Copas and Virginia (Johnson) Copas in Algona, Iowa. As the oldest sibling of 11, she learned how to take care of her brothers and sisters at an early age and her care giving continued well into adulthood as a loving parent of three children and in her almost 40-year career as an OB nurse at the birth center at Mercy Health in Mason City, Iowa. Many stories have been shared of her time helping mothers as they brought their own children into the world. Lou was married to former spouse, Dennis Best on November 30, 1963. She was the loving mother of Lorie, Jon, and Eric and later was blessed with four grandchildren, whom she adored. Kennedy, Alison, Ethan and Sophia were the loves of her life and her happiest times were spent with them all. She spent the majority of her years raising a family in Garner and her later years in Clear Lake where she’d often be found sitting near the lake with her siblings enjoying good stories, great company, and her Mountain Dew. She was quick to remind those getting her drinks that she required half diet and half regular Mountain Dew mixed and always ice in her milk. In 1980, she graduated from NIACC with her nursing degree and worked helping others up until her retirement in 2018. While she used to joke about her being the old maid of the nursing group, she loved her job and it brought her much joy over the years. She loved helping new mothers bring their children into the world as an OB nurse and worked the night shift for her entire career. She was also active in bowling leagues, as an EMT with the Garner ambulance service and loved her weekly coffee sessions with her dear friends as well as the numerous gatherings with siblings, cousins and other family members. Lou is survived by her three children, Lorie, of Clear Lake, Jon (Jeanine) of Norcross, GA and Eric (Sheri) of Chanhassen, MN; her grandkids, Kennedy, Alison, Ethan and Sophia; her mother, Virginia (Copas) Baxter of Clear Lake; brothers Ed (Kolene), Doug (Jo), Greg (Deb), Vince and Phillip; sisters Diane Allen, Altha (Andy) Garfin, and Monica (Don) VerHelst; aunt, Shirley (Robert) Metzger; many nieces, nephews, cousins and friends, including special family friends, Stacy and Sarah Datema and their children, Kylee, Tucker, and Karter. She is preceded in death by her father, Clifton Copas; her brothers, Tom Copas and Tim Copas; her best friend, Deb Hartley; and numerous aunts and uncles.

The family of Louetta "Lou" Jean Best created this Life Tributes page to make it easy to share your memories.

Send flowers to the Best family.