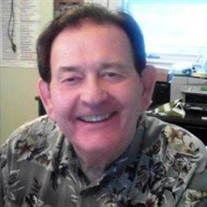 Loren M. Toomsen, 78, of Clear Lake, Iowa passed away Tuesday, December 22, 2020 at the Lake Mills Care Center in Lake Mills, Iowa after an aggressive battle with cancer, first diagnosed this year in late August. He was born February 9, 1942, in Hampton, Iowa to Wilbert and Reba (Johansen) Toomsen. Loren spent much of his childhood in Dumont, Iowa before the family moved to Hampton. A graduate of Hampton High School, he graduated from Waldorf College in Forest City, Iowa in 1965. He was united in marriage to Barbara “Bobbie” McCormick on March 7, 1965, and they had one son, Jon. His career included working with his father as a representative for WonderLife, an early company developing eco-friendly conservation techniques for nourishing farmland. He also owned Toomsen Systems in Clear Lake. Loren was employed for 8 years at Lauridsen Foods in Britt, Iowa, working his way up to Supervisor. In 1985, Loren and Bobbie’s son Jon had a nearly fatal vehicle accident. Loren and Bobbie took over conservatorship for Jon when the facility he was assigned to closed in 1989. Loren dedicated a lot of time to working with and supporting the head injury group. He had booths at many fairs to demonstrate the effects of brain injury. Loren had a passion for genealogy and shared all his hard work with family. He initiated an interface system between area newspapers and the State and National Genealogy Societies for reporting daily death notices to increase the database of the society. Loren loved gardening and waited patiently every spring for his “fresh garden peas” to be ready, hoping it would be before his brothers or sisters got any! Loren and Bobbie traveled throughout Europe and Hawaii. He received endless awards and acknowledgements for his excellent speaking and writing abilities. He was a very active member of Toastmasters and earned the Distinguished Toastmaster award, as well as being named the District 19 Governor for Toastmasters 2007-2008. He also had a beautiful tenor voice and sang in the choir while at Waldorf College and at many, many weddings and family events. Loren is survived by his wife of 55 years, Bobbie, and son, Jon, of Clear Lake; two sisters, Lavae Dierker of Jamestown, Ohio, and Letha (Butch) Ford of Satellite Beach, Florida; two brothers, Lee (Julie) of Cedar Rapids, Iowa, and TJ (Rita) Mckeown of Palm Bay, Florida; and uncle, Selmar Johansen, Roseville, California. He is also survived by his mother-in-law, Ethel Guion; four sisters-in-law, Joyce (Ron) Donley, Janice Case, Mary (Robert) Pruski, and Betty McCormick; as well as many beloved cousins, nieces, and nephews. He was preceded in death by his parents; sister, Lynda Smith; brothers-in-law, Ron Dierker and David McCormick; nephew, Jeff Ford; father-in-law, Raymond Guion; as well as many aunts and uncles. A Celebration of Life is planned for a later date, Covid-19 permitting. Loren had a love for life and the most positive attitude about everything. During his lifetime, Loren had a heart and kidney transplant and never took for granted the new lease on life these life-saving measures afforded him. Bobbie and Jon request that, in lieu of flowers, memorials be made to: Heart Transplantation Fund, University of Minnesota Medical School, https://makingagift.umn.edu/give/fund.html?id=20534; Kidney Transplant Program, University of Minnesota Medical School, https://makingagift.umn.edu/give/fund.html?id=3324; or Mayo Clinic Cancer Research, https://philanthropy.mayoclinic.org/page.aspx?pid=1511&gclid=CjwKCAiAxKv_BRBdEiwAyd40N0bDkKKQCix8FtfKdcP-tSjFYinmUwATj_Tw7EOoTLqjscmreQsujhoCgE8QAvD_BwE.

The family of Loren M. Toomsen created this Life Tributes page to make it easy to share your memories.

Send flowers to the Toomsen family.