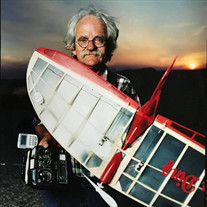 Lester “Les” Wayne Garber PhD., 78, of Emmetsburg, IA, died on May 5, 2021, at Mercy One North Iowa Hospice, Mason City, IA. Family will have a memorial service at a later date. Lester “Les” was born in Estherville , IA, on October 8, 1943, the son of H. Dale and Helen (Gray) Garber. He received his undergraduate and graduate degrees from the University of Iowa, where he met his first wife Shoshana, with whom he had two daughters. He received his doctorate in engineering from Penn State University in 1976. Les was a veteran of the United States Army where he worked on various engineering projects He was a professor of engineering at The University of Rhode Island and The University of Minnesota, Duluth. He worked on various private sector projects including with Cirrus Aviation. Les designed the first computer program for quality control in manufacturing which was marketed internationally. Dr. Garber retired from teaching at the age of 50 to pursue his interest in aviation. Les held a lifelong passion and fascination for all things related to flight. He was a model airplane maker and inventor from an early age. At the age of 8, he received his first ride on an airplane after submitting the winning commercial jingle to a local Iowa radio station contest. His passion for aviation combined with his engineering expertise led him to push the boundaries of model airplane design. He designed the first model gyrocopter as well as other unusual designs and won numerous state and national awards for flying them. His work was published in National Geographic and many model airplane publications throughout the years. Les enjoyed piloting ultra-lite airplanes and eventually went on to earn his pilot’s license. He authored a book detailing the mathematical equations used by the Wright Brothers. The book, entitled “The Wright Brothers and The Birth of Aviation” was published by the Smithsonian, and is considered the best technical analysis of the formulas, equations and calculations used by the Wright Brothers in the development and design of their early airplanes. Through his research for the book he became associated with the Wright Brother’s Airplane Company in Dayton, OH and was involved in the recreation of the Wright Brother’s historic flight at Kitty Hawk, NC in 2005. Les was known as the “propeller man” because he carved 8’ propellers for each plane. Les was a man with many interests. He enjoyed music, literature and theater and was cast as the Wizard in the Duluth Playhouse’s production of The Wizard of Oz. He could recite most of The Great Gatsby, a favorite book he studied for years. Les was loved and cherished by his wife Sandra, his children and grandchildren. He had many friends and loved ones whose lives he has touched, and he will be sadly missed by all who loved him and his unquenchable spirit for life. He leaves his wife Sandra Garber (Brookings, OR), daughters, Alethea Elisheva Garber (East Marion, NY) and Helen Rebekah Garber (Los Angeles, CA) ; grandchildren, James Ace Cohen, and Evelyn Antoinette Gillis; his sisters, Deanna Stuhrk, Winter Haven, FL), Virginia Klepper (Emmetsburg, IA), Marilyn Garber (Minneapolis, MN), Jane Moen (Emmetsburg, IA) Laurie Schneider (Emmetsburg, IA), and his brother William Garber (Omaha, NE). Lester is preceded in death by his parents and his sister Eileen Garber.

The family of Lester Wayne “Les” Garber PhD. created this Life Tributes page to make it easy to share your memories.

Send flowers to the Garber family.