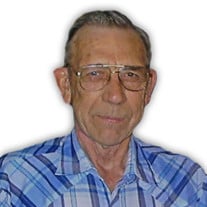 LeRoy Bruce Young, age 90, passed away peacefully at home surrounded by his loving family on December 24, 2021. LeRoy was born on June 7, 1931, to Bruce and Nellie (Johnson) Young on a farm north of Rudd, lowa. At the age of five, his family moved to a farm north of Rockford, lowa. LeRoy was baptized in the Rudd Methodist Church and attended school in Rudd, graduating in 1949. In his youth, LeRoy was an active member of the Rockford Rooters 4-H Club and Boy Scouts Troop 46 of Rudd, receiving his Eagle Scout Badge in 1951. LeRoy enlisted in the Army in 1952 during the Korean War and received his basic training at San Luis Obispo, California. He was then stationed in Tokyo, where he served in radio communications. He was honorably discharged in 1954 with the Good Conduct Medal, National Defense Service Medal, Korean Service Medal, and United Nations Service Medal. He was a proud member of American Legion Post #449 of Nora Springs, Iowa. On September 12, 1954, he was united in marriage to Leila Bailey at the First Christian Church in Mason City, Iowa. They were happy to be parents of three children, Dana, Brad and Brenda. A quiet, gentle man, LeRoy had a natural talent and curiosity about anything with a motor, especially tractors. He was extremely proud to have worked so many years with his dad, learning the mechanical trade that he would follow all of his life and earning him the honored title of "Diesel Doc." In 1962 the repair shop that he and his dad operated on the farm moved to Rockford, becoming Young's Tractor Service. LeRoy and Leila then purchased this business from his parents in 1968. Their son Brad, having also learned the mechanical trade from his father and grandfather, eventually became owner of the shop, making it a family-owned business for three generations. LeRoy continued to enjoy his time at the shop up until just a couple of months before his death. In addition to the love of working at the shop, LeRoy was an avid reader and enjoyed many years of camping with his family. LeRoy and Leila celebrated 67 years of marriage this past September. LeRoy is survived by his wife Leila of Nora Springs, daughter Dana Young and her husband Rick Theilen of Mason City, son Brad Young and his wife Pam of Rockford, daughter Brenda Young of Rockford, granddaughter Amanda Straube and her husband Derek of Rudd, grandson Nolan Young and his fiancée Addie Brenny of Waterloo, great-grandchildren Tell, Eden and Ivy Straube, sister Lois Bosworth of Storm Lake, and several nieces and nephews. He was preceded in death by his parents, brother William Wesley Young in infancy, parents-in-law Melvin and Hazel (Harris) Bailey, brother-in-law Marlin J. Bailey at age four, brother-in-law Ralph Thomas, sister-in-law Iona Thomas, and nephew Robert Thomas. Visitation will be held Wednesday evening, December 29, 2021 from 5:00 pm until 7:00 pm at Hogan Bremer Moore Colonial Chapel, 126 3rd St NE, Mason City. A Funeral Service will be held 10:30 am Thursday, December 30, at Hogan Bremer Moore Colonial Chapel. Burial will follow in Riverside Cemetery, Rockford. Masks will be required to attend the visitation and funeral service. Hogan Bremer Moore Colonial Chapel, 126 3rd St NE, Mason City. (641)423-2372. ColonialChapels.com

LeRoy Bruce Young, age 90, passed away peacefully at home surrounded by his loving family on December 24, 2021. LeRoy was born on June 7, 1931, to Bruce and Nellie (Johnson) Young on a farm north of Rudd, lowa. At the age of five, his family... View Obituary & Service Information

The family of LeRoy Bruce Young created this Life Tributes page to make it easy to share your memories.

Send flowers to the Young family.