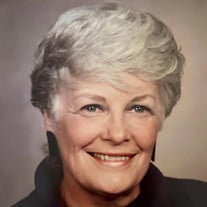 Laurel May O'Rourke, 90, died on Tuesday, September 28, 2021, at Brookdale Memory Care in Leawood, Kansas. A Funeral Mass will be at 10:00 am, Tuesday, October 5, 2021, at Epiphany Parish-St. Joseph Catholic Church, 302 5th St SE, Mason City, Iowa, with Rev. Jake Dunne officiating. Burial will take place at Elmwood St. Joseph Cemetery, Mason City, following the visitation. Public Visitation and lunch will be from 11:00am to 1:00pm on Tuesday, October 5, 2021, at Hogan-Bremer-Moore Colonial Chapel, 126 3rd St NE, Mason City. The family asks for memorials to be considered to the Laurel O’Rourke Memorial fund in lieu of sending flowers. Laurel was born on May 11, 1931, in Clear Lake, Iowa, the daughter of Helmer and Iva (Fuston) Hanson of Nora Springs, Iowa. She attended school in Nora Springs, but completed her education and graduated high school in 1949 from Sioux City East. On January 21, 1950, Laurel married Clem O’Rourke at Holy Name Catholic Church, Rockford, Iowa, from this bond seven children were born. For being the mother of seven children, she still found more ways to make a difference outside of her own children’s lives. She started volunteering as a foreign exchange student placement coordinator in the early 70’s with Youth for Understanding (YFU). This developed into a role as International Trainer. In 1980, Laurel was instrumental in the development of American Intercultural Student Exchange (AISE) where she counseled foreign students placed in the United States and worked until 2002. She traveled 55 countries around the world both through work and for pleasure. Some of her best adventures were climbing the “Great Wall of China”, touring Turkey, South America, Asia, Europe, Middle East and her favorite place was Budapest. In 1980, Laurel was one of 115 people selected to travel to Russia as a Friendship Force Ambassador, an international program dedicated to building bridges across the cultural barriers that separate nations. As a mother, Laurel encouraged and supported her children to be involved in as many activities as possible. Although the farm took a lot of time to manage and all seven kids helped with field work and livestock; school and activities always were a priority. Clem and Laurel made every effort to be present in their children’s lives and this continued with their grandchildren’s activities. She was so proud of all of their accomplishments. When the family was young, Laurel sewed clothing for the girls and their dolls, prepared countless meals for the family and hired help, managed the home and was “chief disciplinarian” while Clem spent long hours on the farm. Although, she wasn’t known for being a traditional farm wife, she was known for her fashion sense and was always dressed nicely and made sure all her family did as well. Not only was she a stylish mom but she would volunteer in any way she could. She was active with the Red Cross, school and community organizations and a faithful member of Holy Name Catholic Church where she was involved in Alter and Rosary and taught religious education for years. Laurel had a deep appreciation for the arts and history with many trips to NYC and Chicago and seeing various Broadway productions and visiting countless museums during her travels worldwide. She had a passion for interior decorating, antique collecting and appraising and owned an antique shop on the family farm for a number of years. She took great pride in her lawn and landscaping both on the farm and when they moved to Mason City in 1989. She believed in self-development and was always enrolling in various classes: painting, macramé, ceramics, decoupage, refinishing furniture and an avid reader. She loved to shop, specifically with her daughters and her friends. She and Clem had a strong network of friends and would gather at one another’s homes often, they bowled, went dancing at the Surf Ballroom, roller skated, golfed frequently and were members of several bridge clubs. They enjoyed watching sports together and their children knew never to interrupt an Iowa Hawkeye basketball game or PGA golf on Sundays. Laurel also loved listening to music, especially the works of Barbara Streisand. Laurel was very committed to her relationships with her siblings and their families, specifically her three sisters. Being the second oldest, she was the glue that kept everyone together. She made it a point to host holiday gatherings, summer outings and be present and helpful when needed in times of celebration as well as adversity. Even with her busy life and large family, her father came to live on the farm with the family for a period of time following the sudden death of her mother. Those left to cherish memories of Laurel are five children, Tracy Wiley, Kansas City; Patrick (Jane) O’Rourke, Fort Dodge; Scott (Yulanda) O’Rourke, Mustang, OK; Kelley O’Rourke, Mason City; Erin (Shane) Fingalsen, Manhattan, KS; grandchildren, Courtney (Kevin) Albertson, Bellevue, NE; Jaimie (Abby) Loch, Brittney (Mike) Matousek, Christopher (Danielle) Wiley, Sean Wiley, all of Kansas City; Ryan (Kristy) O’Rourke, Shenandoah, IA; Andrea (Ryan) Feltz, Mila (Jamie) O’Brien, both of Omaha, NE; Danielle Fernandez, Lenexa, KS; Brianne Fernandez, Shawnee, KS; Sam (Tessa) Crane, Minneapolis; Alec (Caitlin) Crane, Mason City; Chase Crane, Newburgh, NY; Blake Fingalsen, Raymore, KS; Kelli (Jim) Scarrow, Kansas City; Shellie (Ryan) Pike, Fairfax, IA; Grant Wood, Bridge Creek, OK; 23 great-grandchildren; sister, Maxine Worsley; son-in-law, Bill Loch. She was preceded in death by her husband Clem O’Rourke; her parents; daughters, Jessica Loch and Julie Fernandez; sisters, June Johnson, Sylvia Paine Burkheimer; brothers, Gary, Curtis and Rodney Hanson.

The family of Laurel May O'Rourke created this Life Tributes page to make it easy to share your memories.

Send flowers to the O'Rourke family.