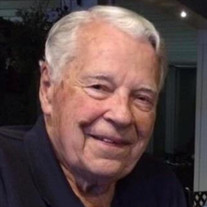 Larry Lee Schroeder, 83, of Clear Lake, IA, passed away on Saturday, January 15, 2022 at MercyOne North Iowa Medical Center, Mason City, IA. A Memorial Service will be held at 2:30 pm, on Saturday, February 26, 2022, at Ward-Van-Slyke Colonial Chapel, 310 1st Ave N, Clear Lake, IA. Visitation will be held from 1:00 pm to 2:30 pm prior to the service. Larry was born November 11, 1938 in Charles City, the son of Edwin and Audrey (Sherman) Schroeder. He was a graduate of Charles City High School’s Class of 1956. He attended Wartburg College and Mason City Junior College, graduating from Drake University in 1961. Larry spent 30 plus years at Community State Bank in Clear Lake. He worked his way up from teller to the Vice President. Many people in the community remember getting their first loan for a car, school or home from Larry. In July of 1967 Larry married Karen Ashland. They had two children, Stephanie and Scott. Larry and Karen were married until her passing in July 1993. In December of 1998, Larry married Karen Engstler. Larry was an active member in the Clear Lake Noon Lions Club, where he served as Treasurer for over 50 years. He was also a former member of the Rotary Club of Clear Lake. Larry loved Western Movies, Books and TV; and even met Gene Autry as a child. He was an athlete who loved all things sports; bowling, biking, cross country skiing, water skiing, ice skating, golf, tennis, softball, basketball and especially baseball. He volunteered to coach many of his son’s activities. Larry was a loyal fan of the Iowa Hawkeyes, Drake Bulldogs, Iowa State Cyclones, Minnesota Vikings, and especially the Minnesota Twins. Larry was a true lake person, spending every summer at the lake as a child and later raising his own family on the shores of Clear Lake. Those left to cherish memories of Larry are his wife; Karen (Engstler) Schroeder; children, Stephanie (Pablo Jones) Schroeder of Minneapolis, MN, Scott (Melissa) Schroeder of Iowa City, IA; step-daughters, Amy (Joe Robinson) Engstler of Algonquin, IL, Tammy (Eric) Hawbaker, Osage, IA; grandchildren, Oliver Freet, Madeline Schroeder, Andrew Schroeder, Audrey Schroeder, Amanda Schuessler, and Alyssa Hawbaker; former son-in-law; Patrick Freet; as well as numerous sisters-in-law, brothers-in-law, cousins, nieces and nephews. Larry was preceded in death by his first wife, Karen (Ashland); and both of his parents.

The family of Larry Lee Schroeder created this Life Tributes page to make it easy to share your memories.

Send flowers to the Schroeder family.