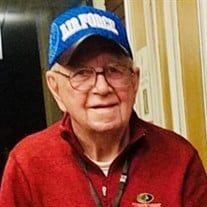 Larry Charles Munn, 80, of Clear Lake, passed away Monday, March 29, 2021, at his home. Per Larry’s wishes, his body has been cremated and an inurnment will be held at Iowa Veterans Cemetery in Adel, IA. Larry was born June 14, 1940, the son of Daniel and Bessie (Tunning) Munn in Mason City. He married Marjorie Marie Reed on June 23, 1962, in Riceville. A graduate of Mason City High School, Larry managed Munn’s Gas Station in Mason City following high school. In March 1961, he enlisted in the United States Air Force and served until 1965. Following an honorable discharge, he worked at Standard Battery and Electric in Charles City before completing Linotype School and working at the Garner Leader. After helping at the Riceville Bowling Alley, Larry worked at Opportunity Village (One Vision) in Clear Lake for 25 years; retiring in 2013. Larry enjoyed golfing, taking trips to Las Vegas, playing slot machines, and spending time with friends and family. His greatest passion was from his years at One Vision. His devotion to the men and women he served was 24/7. He always said they taught him more than he ever taught them. Larry is survived by his wife, Marjorie of Clear Lake; children Doug (Michele) Munn of Clear Lake and Troy Munn of Clear Lake; grandchildren, Stephen (Camri) Scott of Hawaii, Shanda (Jennifer) Hansen of Rockwell, Bliss Cruz of North Carolina, Emily Kellogg of Algona, Kevin Ballard-Munn of Illinois, Haley, Tyler, Brianna, Kyden and Cael Munn all of Clear Lake; four great-grandchildren, Aspen and Bryleigh Scott and Asher and Anniston Hansen; and a brother, Dan Munn, Jr. He was preceded in death by his parents; siblings, Sharon, Tom and a sister in infancy; several aunts and uncles; and a nephew, James Whitinger.

The family of Larry Charles Munn created this Life Tributes page to make it easy to share your memories.

Send flowers to the Munn family.