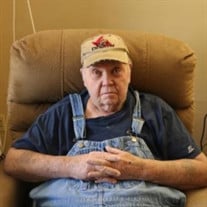 Larry William Moore of Rudd, IA passed away at the age of 84 on July 30th, 2021. Larry was one of twin sons born to Homer and Irene (Rolfes) Moore on April 9th, 1937 at Rudd, Iowa. He received his education and graduated from Rudd High School. In August of 1956, he enlisted in the Army where he served in Battery “A” 553rd F.A. BN. After the Army, Larry began a lifelong career in the auto body field working for others as well as having his own business. Larry had a passion for classic cars and restoration. He enjoyed working on vehicles for friends and family, as well as finding hidden gems in barns and bringing them back to life. You could often find him at a local car show, or working on his latest project car at his shop in Rudd. Although he took pride in any car he worked on, his personal favorites included Cadillacs and his 1970 Buick Riviera that he purchased for $75 dollars. If he wasn’t working on cars, Larry could be found enjoying the outdoors hunting and fishing, or challenging friends in a good game of cards. Even as a child, Larry had a mischievous sense of humor, playing practical jokes on his parents and siblings. Larry always had a joke or funny comment for any conversation, and his sense of humor is how his friends and family will fondly remember him. Larry is survived by his children, Dean (Andrea) Moore of Nora Springs, Doreen (Mark) Marzen of Cartersville, Mark (Kathy) Moore of Rockford, and Steve (Michelle) Moore of Nora Springs; Grandchildren, Sarah (Bret) Walker, Cedar Rapids, Mindy (Brent) Ebling, Maple Grove, MN, Amanda (Levi) Lee, Winterset, the late Nic Marzen (Melissa & Ben Rooney), Geneva, IL, Jenna (Matt) Beuning, Waukee, Alanna (Nick) Miller, Dougherty, Jim (Sammi Barlow), Rockford, Kelsey (Alex) Ward, Okoboji, Mike Moore (Alex Murray), West Des Moines, Cody (Bethany) Moore, Meservey, and 20 great grandchildren. He was preceded in death by his parents, sister Dolores (Russell) Larson, twin brother Leland (Sandy) Moore, and grandson Nic Marzen. Larry will be honored in a private family burial at a later date. Condolences may be sent to 21301 170th Street, Rockwell, IA 50469.

Larry William Moore of Rudd, IA passed away at the age of 84 on July 30th, 2021. Larry was one of twin sons born to Homer and Irene (Rolfes) Moore on April 9th, 1937 at Rudd, Iowa. He received his education and graduated from Rudd High School.... View Obituary & Service Information

The family of Larry William Moore created this Life Tributes page to make it easy to share your memories.

Larry William Moore of Rudd, IA passed away at the age of 84...

Send flowers to the Moore family.