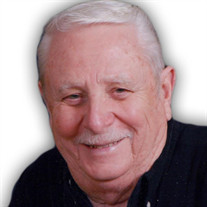 Larry Andrew Cross, age 83, passed away at his home in Nora Springs, IA on Wednesday, October 28, 2020. A funeral service will be held Saturday, November 7th at 10:30am at The First United Methodist Church, 21 3rd Street Northwest, Rockford, IA. Please reference the First United Methodist Church website for live streaming information for those who are unable to attend. Interment will immediately follow the service at Riverside Cemetery, 59 Riverside Ave, Charles City, IA. Family will receive visitation Friday, November 6th from 5pm to 7pm at Sheckler Colonial Chapel, 114 N. Hawkeye Avenue, Nora Springs, IA. Memorial donations may be sent to Sharon Cross to honor Larry with a memorial bench at his favorite camping spot at Rudd Lake. Larry was born on May 15, 1937 in Charles City, IA to the late Robert and Laura (Strus) Cross. After attending Charles City High School, where he spent most of his time playing hooky and chasing girls in his prized convertible, he settled down and served in the Iowa Army National Guard from 1955 to 1963. He completed his basic training at Fort Leonard Wood, Missouri and his skill training at Fort Chaffee, Arkansas, dedicating 8 years of military service in the Charles City Armory under the 1st Battalion, 133rd Infantry Regiment. Upon discharge from the Iowa National Guard, Larry began his 30-year career at John Deere Waterloo Works supporting their manufacturing operation in various roles and was a proud member of the UAW Local 838 from 1963 to 1993. In retirement, Larry was “grandpa” to many local children, helping his wife Sharon with their in-home daycare and was elected to serve as a Councilman for the City of Nora Springs, a position he held from 2001 to 2013. On December 17, 1960 he was united in marriage to the late Patty Fritze giving birth to two daughters Pamela and Kari. On June 1, 1985 Larry united in marriage to Sharon Dodd blending her daughters, Teresa and Jody into a loving family. Larry truly enjoyed spending time with Sharon at his home along the bank of the Shell Rock River. There he could be found fishing when he was not spending time tending to his yard on his beloved John Deere tractor or waxing his Chevy truck. He was a NASCAR fan and a devote supporter of Dale Earnhardt, Sr. On a recent trip visiting his daughter’s home in Charlotte, NC, he had the unique and unexpected opportunity to walk through the childhood home of Dale, Sr., with Dale’s mother as the guide and eventually sitting on her couch where she reminisced of Dale as a young troublemaker. Larry enjoyed his recurring camping trips to Rudd Lake, where he spent time enjoying his family sitting around the campfire, telling stories and sipping on a Dixie cup of blackberry brandy. Larry is survived by his wife Sharon from Nora Springs, his two daughters Pamela (Cleveland) Samuels from San Francisco, CA and Kari (Mark) Potts from Charlotte, NC, his two stepdaughters Jody Fink from Charles City and Teresa (John) Klesath from Nora Springs, his eight grandchildren Isaiah Samuels, Emili and Maggi Potts, Tanner, Colton and Jessica (Kelley) Fink and Caleb and Ashley Howe, and his great grandchild Brooks Kelley; brother, Roland Cross. Larry is preceded in death by his parents Robert and Laura Cross, sister Marcella Carlson, and brothers William Cross and Garland Cross.

The family of Larry Cross created this Life Tributes page to make it easy to share your memories.

Larry Andrew Cross, age 83, passed away at his home in Nora Springs,...

Send flowers to the Cross family.