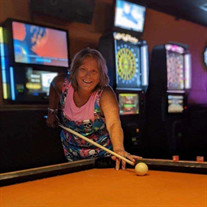 Kimberly Kay Johnson, Mason City, passed away Monday, August 23, 2021. A Celebration of Life will be held 4:00 p.m. to 7:00 p.m. Friday, September 3, 2021 at the Clear Lake VFW. Interment will be held at Memorial Park Cemetery at a later date. Memorial contributions may be directed to Nancy Schroeder and a charity will be established at a later date. Kim was born April 27, 1957, daughter of Ronald and Nancy (Juhl) Schroeder in Mason City. She attended the Clear Lake High School. On May 15, 1973 she welcomed her daughter, Trisha Ann into this world. She worked numerous jobs throughout her life. Kim was united in marriage to Gary Bohn in 1986 to 1991, and to this union a son was born, Robert Ray Bohn. In 2003, Kim was united in marriage to Randy Johnson in Clear Lake, until Randy’s passing in 2004. Kim was a pool enthusiast throughout her adult life. She belonged to the several different pool teams, plus entering into the 2021, State Pool Tournament in Des Moines. Kim’s biggest joy in life was spending time with her family and friends. She loved spending time outside in her garden and she enjoyed making jewelry, and creating many fashionable pieces. Kim’s favorite holiday was Halloween and will be remembered for her decorations and for her pranks during this time. Kim is survived by her daughter, Trisha (Carl) Beery of Mason City; son, Robbie (Becky) Bohn of Perham, MN.; mother, Nancy Schroeder of Clear Lake; sister, Vickie Schroeder of Clear Lake; two brothers, Douglas (Debbie) Schroeder of Dolthan, AL., and Jeffery (Mary) Schroeder of Ventura, IA. and five grandchildren, Payne, Jaxon, Mason, Navy and Isla; one great grandson, Kayn. Kim is preceded in death by her father, Ronald Schroeder and husband, Randy Johnson.

Kimberly Kay Johnson, Mason City, passed away Monday, August 23, 2021. A Celebration of Life will be held 4:00 p.m. to 7:00 p.m. Friday, September 3, 2021 at the Clear Lake VFW. Interment will be held at Memorial Park Cemetery at a later... View Obituary & Service Information

The family of Kimberly Kay Johnson created this Life Tributes page to make it easy to share your memories.

Send flowers to the Johnson family.