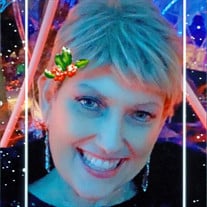 Kelly Leslie, 49, of Worthington, Ohio passed away Friday, January 7, 2022 after a courageous 20 year battle with breast cancer at the Kobacker House in Columbus, Ohio. Funeral Services will be held 1:00 p.m. Friday January 21, 2022 at the Vineyard Christian Church, 1055 McNaughten Rd, Columbus, OH 43213. A Celebration of her life in Mason City will be held at a later date. In Lieu of Flowers, memorials may be made to Breast Cancer Research Foundation in Kelly's name. Kelly was born April 13, 1972, the daughter of Brian and Sherry (Jewell) Lockwood, in Mason City, Iowa. She graduated from Mason City High School in the class of 1990 and was blessed to celebrate her 30th class reunion with her friends this past August, which was delayed due to COVID. Following high school, she attended NIACC, where she met her future husband, Lance Leslie. They later moved to Columbus, OH, were married, and had a son, Lance. Kelly was always so proud of Lance and his accomplishments; he is set to graduate from dental school in May. Kelly worked for Cacique, AT&T for fifteen years before they closed their office and from there worked for McKesson. Kelly was full of life and didn't let the cancer stop her, SHE NEVER GAVE UP! She especially loved watching the Iowa Hawkeyes and for that matter, any sports team. Kelly is survived by her husband, Lance Leslie; son, Lance; parents, Brian and Sherry Lockwood; brother, Cory (Mandi) Lockwood and their children: Kayla, Parker, and Aaron Bleil; mother-in-law Linda Bey; sister-in-law Ronisha Bey and her son, Lawrence; brother-in-law, Asura (Mel) Bey; special Aunt Sandy Lockwood, who was her "Hawkeye" buddy; as well as numerous aunts, uncles and cousins; many beloved friends and coworkers, including: Darci, Amy, Kimmie, Rhonda, Jenn and April. Kelly was preceded in death by her maternal grandparents, Duane and JoAnne Jewell; paternal grandparents, Richard and Sulie Lockwood; father-in-law, Lance Leslie; and her Aunt Sandra Lockwood, formerly of Tubac, AZ. A special thank you to Dr. Taral Patel, her oncologist, at the Zangmeister Cancer Center, as well as all of her nurses and staff including Tammy, Beth and Ruth for the delicious cookies. And most importantly, thank you to her husband, Lance, for his dedication and devoted care throughout the years.

Kelly Leslie, 49, of Worthington, Ohio passed away Friday, January 7, 2022 after a courageous 20 year battle with breast cancer at the Kobacker House in Columbus, Ohio. Funeral Services will be held 1:00 p.m. Friday January 21, 2022 at the Vineyard... View Obituary & Service Information

The family of Kelly Leslie created this Life Tributes page to make it easy to share your memories.

Send flowers to the Leslie family.