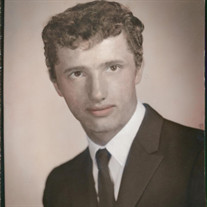 Our dad, Keith Betts, 74, of Mason City, Iowa passed away on 1. December, 2020- in our care, along with incredible support from Hospice. As his health declined, his patience with himself and with others did, too. However, he maintained his commitment to family. Behind his brusque demeanor, was a protective family man who expressed his heart through unconventional actions. We were the recipients of his gifts, in both tangible and intangible forms, like receiving a card and grocery store gift certificate to "fill up your basket" for May Day, or being supportive and stoic, when we couldn't, after a pet dog or friend died. He joined many camping and fishing outings with us, and always treated his near and dear to a plethora of meals over many years. Our dad had a penchant for antiquing and would often transform an oddity into something of elegance or useful decor'. His creativity could match his thoughtfulness. When trolling for collectibles, he also kept his eagle eye out for others by finding and giving family, friends, or community businesses- a treasured item that suited their respective tastes. Neighbor children were no strangers to getting their bicycles repaired by him, which, many times, resulted in invitations to their birthday parties. Lastly, he lived up to his name, Betts, with occasional trips to a casino. Born to Roy and Velma Betts on 23. November, 1946 in Osage, Iowa, he was a fraternal twin and youngest of eight siblings. He attended school in McIntire and Riceville, Iowa, graduating in 1965. Vietnam prompted his draft to the Army, stationed in Schwäbisch Gmünd, Germany, and with an honorable discharge. He married our mother, Sally Stejskal in 1969, and later, they divorced. After 40 years, he retired from the railroad in 2006. Survivors include daughters, LaVonne and Natalie (Kent and Alyvia), granddaughter, Paige (Kaleb), and great-granddaughter, Briley, brother Leon, sister in-laws, Mary Betts and Patty Betts, and many nieces and nephews. He was predeceased by his parents, brothers: Eldon, Eugene, Gordon, Neil, twin brother, Kaye, and sisters: Dode, and Nelda. A celebration of life will be held at a later date in the spring of 2021.

Our dad, Keith Betts, 74, of Mason City, Iowa passed away on 1. December, 2020- in our care, along with incredible support from Hospice. As his health declined, his patience with himself and with others did, too. However, he maintained his... View Obituary & Service Information

The family of Keith E Betts created this Life Tributes page to make it easy to share your memories.

Send flowers to the Betts family.