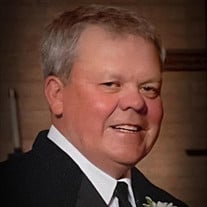 Kary Scott Paulson, 75, of Northwood, Iowa passed away on October 15th, 2021 in Jackson Hole, Wyoming. A celebration of life for Kary will be held 10:30 a.m. Saturday October 23, 2021 at First Lutheran Church, 309 9th Street N, Northwood. He will be laid to rest at Sunset Rest Cemetery in Northwood. Following the services, family and friends are invited to the Timbers, 500 Central Avenue, Northwood, IA to continue celebrating Kary’s life. Visitation to greet family and friends will be held from 5:00 p.m. to 7:30 p.m. on Friday October 22, 2021 at First Lutheran Church in Northwood. Masks are recommended for all in attendance. A livestream of the services for Kary can be found here: https://m.facebook.com/HoganBremerMooreColonialChapel/ In lieu of customary remembrances, the family suggests memorials be directed to MercyOne Hospice of North Iowa in Kary’s honor. Kary brought joy into the lives of his parents, Kermit and Velma (Ferris) Paulson on October 10th, 1946. He was a Northwood-Kensett Viking graduating with the class of 1965. After high school he attended NIACC and later transferred to Mankato State to pursue a degree in economics. During high school he met his high school sweetheart, Carol Rozen. They were united in marriage on August 10th, 1968. In 1970 he enlisted in the Iowa National Guard in Atlantic, IA and trained in Fort Campbell, KY. Upon completion he returned to Atlantic where their family grew and they were blessed with three amazing children, Kirk, Sarah and Kris. Over the years they created countless beautiful memories with their family. His career started by selling Filter Queen vacuums door to door and working at Green Giant in Le Sueur, MN. Following in the footsteps of his father and grandfather, Kary moved on to begin his banking career. He started as a bank examiner with the Iowa Department of Banking. Then in 1973 he started with Northwood State Bank as a VP and cashier. In 1987 he was named president of Northwood State Bank. In 2000 he stepped down as president and became chairman of the board which he continued until his passing. His passion ran deep with a love for the beauty, culture and heritage of Teton Valley, WY. As a young child he vacationed for many years at Moose Head Ranch with his mom and dad. He continued the tradition with his own family and vacationed yearly at the Triangle X Ranch for 16 years. He cherished the memories he was creating in Wyoming with his family. In 1994, Kary and Carol decided to build a cabin of their own, allowing him to spend more time in a place he loved. Amongst the things he loved the most was his family. Kary found joy in planning trips for the entire family, and treasured his time with them. His children and their families surprised him by planning their own trip, arriving in Wyoming as he celebrated his 60th birthday. He was thrilled and enjoyed the time spent together so much he planned another gathering in Wyoming as he and Carol celebrated their 50th wedding anniversary. He leaves behind to cherish his memory, his wife of 53 years Carol Paulson; children, Kirk (Kelly) Paulson of Mason City, Sarah (Craig) Walter of Osage, Kris (Brandi) Paulson of Mason City; six grandchildren, Tyler, Hudsen, Peyton, Josh, Jacob, and Avery; a sister, Darlene Latimer, Dundee, IL; his brother-in-law Jim (Maureen) Rozen of Robins, IA; as well as numerous extended family members and friends. Kary was preceded in death by his parents, Kermit and Velma and Carol's parents, Harry and Marie (Collins) Rozen.

The family of Kary Scott Paulson created this Life Tributes page to make it easy to share your memories.

Kary Scott Paulson, 75, of Northwood, Iowa passed away on October...

Send flowers to the Paulson family.