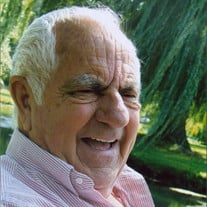 Karl Dean Laudner, 86, passed away peacefully on Wednesday, January 27, 2022 at MercyOne North Iowa In-patient Hospice, Mason City, IA. Though he died of pneumonia, Karl had a six-year journey with dementia. A Celebration of Life will be held at 11:00am Monday, January 31, 2022, First Presbyterian Church, 10 S. Pierce, Mason City with Pastor Beth Ehlers officiating. Inurnment will take place in the Dumont Cemetery. Visitation will be held from 4:00pm to 6:00pm on Sunday, January 30, 2022 at Hogan-Bremer-Moore Colonial Chapel, 126 3rd Street NE, Mason City. In lieu of customary remembrances, the family suggests that memorials be directed to either the First Presbyterian Church, Mason City, MercyOne North Iowa Hospice, Mason City or the National Pigeon Association, PO Box 295, Winston, GA, 30187. Karl was born on October 19, 1935, in the West Fork area of Sheffield, IA, the eighth-born of nine children of John and Julie (Murphy) Laudner. He attended school in Sheffield, both country (West Fork) and public school. It was early in life that Karl developed a keen interest in wildlife and critters of all kinds, which would come to be a life-long passion. Karl’s involvement in raising pigeons and attending swap meets and shows continued until a few months before his passing. These were activities that he shared with his son, Tony, throughout many years. Karl’s work ethic developed early in life, as he had a variety of jobs as a young man, including delivering newspapers and working at the Diamond Hatchery in Sheffield. Later, Karl was a 4-H leader and served in the National Guard. Throughout Karl’s work life he was a service/repairman, delivering fuel for many area businesses, including the last 20 years at Thermogas. Karl’s joyful personality brought many smiles to his riders as a driver for Cerro Gordo public transit and shuttle bus for Mercy Hospital. On October 12, 1958, Karl married Marlys Cormaney in Hampton. Son Tony was born in 1961 and a second son, Michael was born in 1965. Michael passed away at 18 months of age. Together, Karl and Marlys shared 44 years of loving marriage. Marlys passed away in June 2003. On May 31, 2006, at First Presbyterian Church in Mason City, Karl married Jean (O’Brien). He soon became an active member of the church. In his quiet manner, Karl shared his engaging ways of interacting with children and young people. Karl will be remembered as a gentle, fun-loving and kind man. In retirement, Karl and Jean coordinated a coffee group at church. They volunteered weekly at Affordables, a local thrift store, for five years and served up many a meal at community kitchen. Those left to cherish memories of Karl are his wife, Jean, son, Tony, Sheffield, Jean’s children, Sara Fathauer (Eric Reder) and Eric’s son, Christian, all of New Richmond, Wisconsin, Megan O’Brien and sons Kevin and Andrew Honas, all of Lawrence, Kansas and countless nieces, nephews and brothers-in-law. Preceding Karl in death are his first wife, Marlys, son Michael and all of his siblings (Clinton, Alta, Berniece, Leland, Gerald, Wilma, Beryl and Eva) and Jean’s son, Damien. The family wishes to express gratitude for the care Karl received at Hospice and the Salvation Army Adult Day Health Center.

Karl Dean Laudner, 86, passed away peacefully on Wednesday, January 27, 2022 at MercyOne North Iowa In-patient Hospice, Mason City, IA. Though he died of pneumonia, Karl had a six-year journey with dementia. A Celebration of Life will be held... View Obituary & Service Information

The family of Karl Dean Laudner created this Life Tributes page to make it easy to share your memories.

Send flowers to the Laudner family.