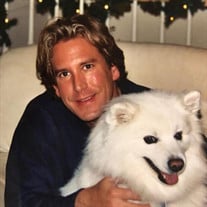 Kail A. Christensen, 58, of Avon, CO and recently of Clear Lake, IA passed away Saturday, March 5th, 2022. A “Celebration of Life” ceremony will be held on Saturday, June 11th for family and friends at the Prime and Wine in Mason City, Iowa starting with a social gathering at 5pm, to be followed by a service and dinner. Kail Alan Christensen was born on October 16th, 1963 in Cresco, Iowa, the son of Larry A. Christensen and Dorothy “Dot” (Carwell) Cagle. He graduated from Paynesville (MN) High School a semester early and backpacked throughout Germany to learn about his heritage, visiting relatives along the way. He then entered Winona State University where he graduated with a business degree and from there never looked back. After college he made his way to Los Angeles and developed NEWS (National Employment Wire Services) Corp, one of the first online employment service companies which he then sold to fulfil his dream to live in the Mountains. With his move to Avon, Colorado, which he called home till his passing, he became involved with personal fitness and was a successful personal trainer as well as taking on real estate investments in Vail, Co. Kail’s hands were never idle, he was constantly on the move, creating the next best thing. Through a lot of research and hard work, Kail went on to create the company Believe, which boomed into a multi-functional fundraising organization, impacting countless lives around the world. Growing up in the Midwest, Kail believed in the honor of a handshake and a man’s word, however, through his growth in the business world, he was soon taught differently, but he personally never backed down from that ideal. With Believe came worldwide travel. His adventures soon became monumental, as he met renowned business people and celebrities all over the globe and was able to study and confer with these many great minds. He was always the problem solver and never let “the box” define his solutions. Kail’s mind was always busy, plotting his next move, planning the next investment, and he was never afraid to jump. Kail enrolled and completed a Navy Seal training camp, completed a Dale Carnegie class, always trying to improve himself and gain knowledge. He had a passion for the water and scuba-diving, spending time in Maui, as well as a love for the peaceful backdrop of the mountains and being on the ski slopes of Colorado. He spent time assisting his cousin with a Fox television show called “Pinks,” which placed him on the television at times. Kail also fell in love with Vietnam and the people there, making many special friendships. Kail’s family was his foundation; he looked forward to time spent with his mother and sister, niece and nephews, his father, always making sure that every moment counted creating wonderful memories. He cherished his four legged companion, Yukon Cornelius, who was at his side for many years. Though our hearts ache, Kail had stated many times “I have lived a full life and have gotten to do all I have wanted to do.” We know that Kail was “bigger than life” and his legacy has just begun. Those left to cherish his memory are his wife Ginelyn(Mandal) Christensen of Maui, HI, mother, Dorothy “Dot” Cagle of Clear Lake, IA; father , Larry Christensen(Marcia) of Mason City, IA; sister Kim Mitchell (David Haas) of Appleton, MN; beloved niece and nephews, Lane(Rachel) Mitchell, Tosh, Reis, and T.J. Mitchell; uncle, Glenn Carwell, Aunt, Marilee Christensen; as well as numerous extended family members and cherished friends. Preceding him in death are his grandparents, Russ and Tekla Carwell and Chris and Marjorie Christensen; step-father, Wes Cagle; uncle, Eddie Christensen; aunt, Eileen Carwell.

Kail A. Christensen, 58, of Avon, CO and recently of Clear Lake, IA passed away Saturday, March 5th, 2022. A &#8220;Celebration of Life&#8221; ceremony will be held on Saturday, June 11th for family and friends at the Prime and Wine in Mason... View Obituary & Service Information

The family of Kail Alan Christensen created this Life Tributes page to make it easy to share your memories.