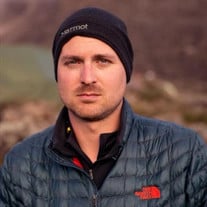 Justin A. Anderson, 38, of Ventura died Wednesday, March 2, 2022 at MercyOne North Iowa Medical Center in Mason City. Funeral Services will be held 11:30 a.m. Saturday, March 5, 2022 at the Surf Ballroom, 460 N Shore Dr, Clear Lake, IA 50428. He will be laid to rest at Elmwood-St. Joseph Cemetery in Mason City. The family will greet relatives and friends from 9:00 a.m. to 11:30 a.m. at the Surf. Please come casual, your favorite Rock and Roll tee or Above + Beyond tee, is perfect. Memorials may be directed to Above + Beyond Cancer or the Hope Lodge, both meaningful and supportive organizations to Justin. A live stream of the service can be found here: https://www.facebook.com/Ward-Van-Slyke-Colonial-Chapel-Crematory-163331107018131/ Justin Allan Anderson was born January 12, 1984 in Mason City, IA to Scott Anderson and Kimberly (Trampel) Buffington. He went to school in Clear Lake, where he graduated in 2002 and sometimes delivered pizzas. Ready for a change of scenery, Justin decided to leave northern Iowa in search of new adventures. Justin’s adventures included: moving to San Francisco, CA, then back; moving to Iowa City, then back; moving to Arkansas, then back, and also working at Best Buy, (with their quality electronics and low prices). Justin played in several bands, and you may have heard them play at the former Toast Bar in Mason City, Surf Ballroom in Clear Lake, or at a random bench in the woods of East Park. After returning home, Justin became a bartender, where he truly utilized his skills in schmoozing and being generally fun. He soon met Alicia Peterson and there were (metaphorical) fireworks. They began their life together, but stupid fate threw a wrench into their plans in 2010, when Justin was diagnosed with the c word (not chlamydia, if that’s what you thought.) He stayed at the Hope Lodge in Iowa City and realized that schmoozing and general fun-ness had some benefit when used around other people going through the worst part of their lives. He partnered with his newfound friend, Dr. Richard Deming, to help raise money for cancer survivors to embark on their own adventures through Above + Beyond Cancer. Justin climbed mountains, like real ones. He climbed to base camp of Mt. Everest, Mt. Kilimanjaro, traveled to Nepal, explored Machu Picchu, visited Italy, the Netherlands, France, Switzerland, Austria, Germany and many exciting locations in Iowa, always returning home to Ventura. He played his guitar, although he never completed a song and often annoyed everyone with his optimism, but they secretly loved it. The not-chlamydia had a habit of popping up periodically and being a real buzzkill, but Justin made the best of things. He worked in marketing (which is just schmoozing for pay) at IMT in Garner, made music whenever possible, spent as much time as possible with his family, friends, and wiener dog, Kujo, and became internet friends with Katie Couric. It was great - He was great. Justin hated the expression “lost the battle” because the “c” word could not defeat him, at best it’d be a draw. And final scores aside, he didn’t want this to define him. Justin defined himself. He was: a husband, son, brother, friend, confidant, mountain climber, cousin, co-worker, nephew, musician, grandson, advocate, nature lover, practical jokester, expert conversationalist and so much more; he was all of these things irrespective of the c-word and the imaginary skirmish he DEFINITELY did not lose. But, here we are in a world without Justin. He would want everyone who loved him - and we are many - to feel REALLY REALLY bad… but only briefly. So, here’s your chance - feel bad starting now. This sucks and this will hurt, you will cry, we will all cry. But get your tears out now because on Saturday, we will congregate and talk about all the amazing (and ridiculous) memories we have. It will almost be fun; not as much fun as being with the schmoozer, but probably way better than what you currently have scheduled for Saturday morning. It may not be as exciting as Nepal or working at Best Buy. But please join us as we send Justin on his final adventure before returning him back home. Those he was lucky enough to enjoy this marvelous life with include his beloved wife, Alicia; parents, Scott (Kim) Anderson and Kim (Kevin) Buffington; sister, Heather (Quan) Joyner; step-siblings, Heather (Andy) Boelman, Chris Buffington and Adam (Megan) Jarosh; grandpa, Ron (Jane) Trampel; grandma, Barbara Anderson; step-grandparents; Alicia’s parents, Dan and Nan Peterson; brothers-in-law, Seth (Evie) Peterson and Tyler (Beka) Peterson; four-legged baby, Kujo; as well as numerous extended family members and all of the best friends he made along the way. Those there to greet him at his next adventure were his great-grandparents, Bonnie and Edgar May; grandma, Karolyn Trampel; grandpa, James Anderson; and his step-grandparents. Above + Beyond Cancer: https://aboveandbeyondcancer.org/ Hope Lodge: https://www.cancer.org/treatment/support-programs-and-services/patient-lodging/hope-lodge/iowa-city/staying-with-us.html Ward-Van Slyke Colonial Chapel, 310 1st Avenue North, Clear Lake, IA 50428. (641) 357-2193. ColonialChapels.com

The family of Justin A. Anderson created this Life Tributes page to make it easy to share your memories.

Send flowers to the Anderson family.