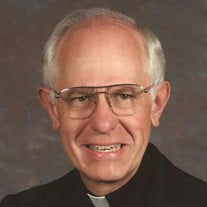 Rev. Monsignor Joseph J. Slepicka, 92, of Clear Lake and formerly of Mason City, died Friday, September 17, 2021 at the Muse Norris Hospice Inpatient Unit in Mason City. Mass of Christian Burial will be held 10:30 am Friday, September 24, 2021 at Epiphany Parish - Holy Family Catholic Church, 722 N Adams Ave., Mason City. A livestream will be available on the Epiphany Parish Facebook page. Burial will follow in Elmwood - St Joseph Cemetery, Mason City. Visitation with public viewing will be held Thursday evening, September 23, at Epiphany Parish - Holy Family Catholic Church from 5:00 pm until 7:00 pm. The Third and Fourth Degree Knights of Columbus will pray the Rosary at 7:00 pm with a Scriptural Wake service to follow. Epiphany Parish asks all to wear face masks at Mass and visitation. Joseph Slepicka was born on August 23, 1929 to William and Martha (Hebel) Slepicka. He attended and graduated from Holy Family Catholic High School in 1947. Following graduation, he attended Loras College and Mt. St. Bernard Seminary in Dubuque. On February 5, 1955, Father Slepicka was ordained into the Priesthood by Archbishop Leo Binz at Christ the King Chapel, Loras College. Throughout his nearly 45 years in active ministry ,Msgr. Slepicka served the parishes of Immaculate Conception, Charles City, St. Patrick’s, Waukon, St. Raphael Cathedral, Dubuque, Sacred Heart, Manly, Holy Family, Mason City, and St. Patrick’s, Clear Lake. In addition to serving these parishes, Msgr. Slepicka also served as secretary to Archbishop Henry Rohlman, as a dean at Loras College, and as a faculty member of Immaculate Conception, Charles City, St. Patrick’s, Waukon, Wahlert, Dubuque, and Newman, Mason City. From 1984 until 1999, he served on the Priests Council and served on the Archdiocesan Board of Education from 1972 until 1978, and as the dean of the Mason City Deanery from 1988 until 1999. On April 18, 1991, he was named a Prelate of Honor by Pope John Paul II and assumed the title, Rev. Monsignor. On July 13, 1999, Msgr. Slepicka retired after serving nearly 45 years within the Archdiocese of Dubuque. Although retired, Msgr. Slepicka still remained active within the parishes of St. Patrick’s, where he was currently a member, and Holy Family. He was a faithful member of the Knights of Columbus and served as Chaplain of the Monsignor Dougherty Fourth Degree Assembly, a strong supporter of the Boy Scouts, having earned his own rank of Eagle Scout, and a devoted member of the Lions Club. Msgr. Slepicka was always active – playing golf, hunting, fishing, and playing bridge and card games. He loved to travel, taking annual vacations with his parents and Aunt Ann Hebel, and later traveling with friends and family. Msgr. Slepicka is survived by his nieces, Stephanie (Kenneth) Shipp, Alexandria, VA, Paula (Michael) Hovan, Crofton, MD, and Antonia (John) Antonucci, Vienna, VA and their families; as well as extended family and many friends. He is preceded in death by his parents, William and Martha; and brother, Francis (Kathleen) Slepicka.

The family of Rev. Msgr. Joseph J. Slepicka created this Life Tributes page to make it easy to share your memories.

Send flowers to the Slepicka family.