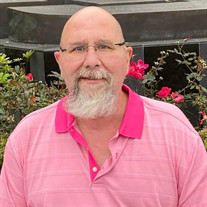 Joseph P. “Joe” Green, 64, formerly of Mason City died February 13, 2022 in Orlando FL. He was born January 25, 1958 in Mason City to Gervin and Georgene (Hagmann) Green. Joe graduated from Newman High School in 1976. After high school he developed a love for repairing vintage tube radios, and he earned his license as a HAM radio operator (WB0MMZ) which he held until his death. He started a career as a meatcutter soon after high school. He worked for the Hy-Vee grocery chain, moving from Iowa to stores in Ottumwa and Faribault. In the early '80s Joe earned a degree in mortuary science from the Cincinnati College of Mortuary Science. He served as a funeral director in Iowa and Minnesota until he moved to Florida in 2010. Once being settled in Orlando; Joe met and fell in love with Shari Brown in 2012. The two married on August 8, 2013. Joe is survived by his loving wife, Shari; her 2 daughters, Denuevia Bowen of Orlando and Alyinth (Robin) Diaz of Brandon, FL; 5 siblings, Jude (Bill) Eggert of LeRoy, MN, Tom (Char McLaughlin) Green of West Des Moines, Chris (Jackie) Green of Iowa City, Mary Green of Philadelphia and Therese Green of Brooklyn, NY; 2 uncles, Willy Green of Mason City and John Green of Clear Lake. He is preceded in death by his parents and infant brother, William Carl. A private memorial service for family and friends is being held at Newcomer Funeral home, 335 SR-434, Longwood, FL 32750 on March 5, 2022 at 11am EST. Memorials may be sent: Shari Brown-Green 4702 Watch Hill Ct. Orlando, FL 32808 Newcomer Funeral Home is assisting the family with local arrangements.

The family of Joseph P. "Joe" Green created this Life Tributes page to make it easy to share your memories.

Send flowers to the Green family.