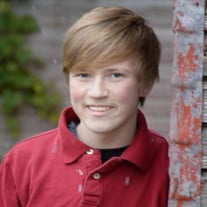 Jordon R. Roggeman, 20 of Mason City, passed away Tuesday, August 31, 2021, surrounded by his family at his home in Mason City. A Celebration of Life will be held 10:30 am Saturday, September 4, 2021 at First United Methodist Church, 119 S. Georgia Ave., Mason City. Burial will follow in Memorial Park Cemetery, Mason City. Those in attendance are encouraged to wear facial coverings and practice social distancing. For those unable to attend Jordon's service, a livestream will be available through the First United Methodist Church Facebook page. Facebook.com/firstunitedmethodistchurchmasoncityiowa Jordon’s family will greet relatives and friends on Friday evening, September 3, from 5:00 pm until 7:00 pm at Hogan Bremer Moore Colonial Chapel, 126 3rd St NE, Mason City. Visitation will resume one hour prior to Jordon’s service at the church on Saturday. In lieu of flowers, memorials may be left in Jordon’s name to Jordon’s donation account through CENT Credit Union. The son of Gregory and Sandra (Anderson) Roggeman, Jordon Raymond was born on February 3, 2001 at Mercy Medical Center in Mason City where his older brother, Joshua, eagerly welcomed his arrival along with his parents. As a lifelong resident of Mason City, Jordon loved his family and friends and especially enjoyed being with his grandparents and spending time with friends while in Cub Scouts. Jordon grew up in the First United Methodist Church and spent many Sunday mornings ushering and attending Sunday school. At the age of 14 Jordon began working at Fareway and eventually worked at KFC, The Blue Heron, and Pancheros. In November of 2018 Jordon was diagnosed with Leukemia at the University of Iowa Hospital and Clinics. For the last three years he battled his diagnosis at the University of Iowa, Minneapolis Masonic Children’s Hospital, and St. Jude’s Children’s Hospital. Jordon attended Mason City Alternative School and graduated among the Class of 2020 from a hospital room in Iowa City. Jordon’s favorite pastime was being with his friends; he loved driving around, listening to music, and rapping; countless miles and hours were spent cruising through Mason City. He loved shooting hoops with friends at different courts around town and loved adding to his hat, shoe, and sock collections. Those grateful in sharing in Jordon’s life are his parents, Gregory and Sandi Roggeman, Mason City; brother, Joshua and Jamie Roggeman and their children, Zachary and Addilyn, Urbandale; best friend, Maliak Lewis; godparents, Dawn Branstad and Jeffrey Roggeman; aunts and uncles, Stephanie and Richard Hodge, Renee and Rick Wasinger, Kenny and Karen Anderson, and Dean and Sherry Anderson; grandparents, Ken and Ruth Anderson; as well as many cousins and friends. He is preceded in death by his paternal grandparents, Raymond and Naomi Roggeman, and maternal grandmother, Marilyn Anderson; aunts and uncles, Steve Anderson, Daryl Roggeman, Lisa Smith, and Kendra Anderson.

Jordon R. Roggeman, 20 of Mason City, passed away Tuesday, August 31, 2021, surrounded by his family at his home in Mason City. A Celebration of Life will be held 10:30 am Saturday, September 4, 2021 at First United Methodist Church, 119... View Obituary & Service Information

The family of Jordon R Roggeman created this Life Tributes page to make it easy to share your memories.

Send flowers to the Roggeman family.