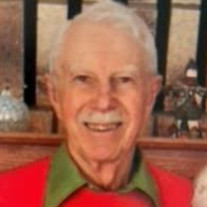 John Lange Wharam passed away on Saturday, September 4, 2021 at the age of 95. A Celebration of Life will be held on Saturday, October 23 from 11:00 am – 2:00 pm at the VFW in Clear Lake (219 Main Avenue). The family asks that memorials be directed towards the Community Kitchen of North Iowa, 606 North Monroe Avenue, Mason City, IA 50401. He was born March 1, 1926. His mother was Julia Lange Wharam and father was George Joe Wharam. John grew up on a farm northwest of Mason City. The house was old and had no running water or central heat. The kitchen was heated with a cook stove and the living room with a wood burning space heater. The upstairs bedroom where John slept had no heat. John grew up in the great depression of the 1930’s. The family was poor like everybody else but living on the farm, they always had food to eat. John and his older sister, Jean Anne, didn’t have shoes to wear in the summer. They got shoes in the fall to go back to school. For Christmas in 1932, all they got in their Christmas stockings was an apple, an orange, peanuts in the shells and hard candy. John learned to be very frugal and only borrowed money to buy two cars, a house, or farm land. He had to work on the farm as was expected. He started driving a team of horses in the field when eight years old to help make hay. By eleven, he could hook up a team of horses and moved and raked all the hay. When fourteen, he learned to harness a team. That was not easy as he was only five foot tall and weighed eighty five pounds. He attended a one room school house, Lime Creek #4 for eight years. Then he went to Mason City High School graduating in 1943. John then wanted a car of his own and bought a 1933 Chevrolet. It wasn’t much of a car, as the window broke out of the driver’s side door and it had no heater. He drove that for three winters. After that he was happy to have a car with all of the windows intact and a heater. In 1946, John enlisted in the Army and served in Korea as a truck driver for a telephone line crew. He returned home mid summer of 1947. At that time, his Dad was busy remodeling a tenant house. To help out, John ran the thrashing rig. That fall he started college, one year at Mason City Jr. College and three years at Iowa State College in Ames. He married LaDonna Hansen before going to Ames. At Ames, they lived in a 24 foot trailer house. He graduated in 1951 with a Bachelor of Arts degree in Mechanical Engineering in the top 10% of the class. He took a job with Honeywell in Minneapolis. They moved to a 20 x 20 foot house, which had no running water or telephone. During 1952 and 1953, John, LaDonna and family members built a house at 2894 Fairlawn Place in Eagan. They raised a son, Merel and daughter, LaVerna at that house. In 1961, John left Honeywell and took a job with 3M Company in St. Paul. It was a much better place for him to work and he got to do things he was capable of. In 1964, he completed testing and became a registered professional engineer. He worked with a team that developed and designed a device for the Apollo Space Program. Later on, he managed all the technical activities to develop and bring into production, the compact VHS video cassette. This was a three year project working with a company in Hong Kong. In 1991, he retired from 3M Company after working there for 30 years. He then built a house in Plymouth on the banks of the Shell Rock river. He is survived by his son, Merel (Sherry) and his daughter, LaVerna (Kim), grandchildren Corey Jones (Lonnie), Andy Lissick (Jacci) and Nick Lissick, great grandchildren Dylan, Jessica, Brooks and Cooper and great grandson Urijah, sister Jean Anne (John) Parr, Merel and LaVerna’s Mother, LaDonna Wharam, many nieces and nephews and special friends Pat Fullerton and Dixie Bowman.

The family of John Lange Wharam created this Life Tributes page to make it easy to share your memories.

Send flowers to the Wharam family.