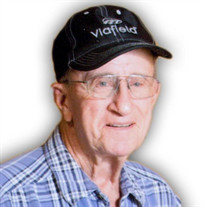 John Leo Miller Sr., 81, passed away on Tuesday, November 16, 2021 at the Floyd County Memorial Hospital. A Funeral Service will be held at 10:30am, Monday, November 22, 2021 at Rockford Zion Lutheran Church, 805 E Main Ave, Rockford, IA, with Pastor, Bob Scheurer officiating. Burial will be held in Riverside Cemetery in Rockford, IA. Visitation will be held from 2:00pm to 4:00pm Sunday, November 21, 2021 at Sheckler Colonial Chapel, 114 N Hawkeye Ave, Nora Springs, IA. To honor John and his laid back personality casual clothing is encouraged to be worn to the visitation and the service, as he was known best for his flannel and blue jeans. John was born on September 11, 1940, in Lawler, IA, the son of Paul and Leona (Obermiller) Miller. He was a graduate of Rockford High School. John was a self-employed construction worker, he really enjoyed working with concrete. On July 1, 1995 he married Barbara Crum whom he would happily spend the remainder of his life with. Those who knew John will remember him as someone who was caring and had a great sense of humor. He gave nicknames to just about everyone he knew. John was willing to help others without expecting anything in return, especially when it came to doing handyman tasks. Going to the local gas station for a roll, coffee and the occasional lottery ticket was an errand he commonly did. Although he hated to admit it, John loved walking the dog. His children recall him being a perfectionist, nothing could be off by a millimeter. When John wasn’t busy working he could be found fishing, camping and or going to the casino. John deeply loved his family even if he was constantly giving them a hard time. He was always at the grandchildren's sporting events cheering them on. His family takes great comfort in knowing that John’s stories will be remembered for years to come. Those left to cherish memories of John are his wife, Barbara; children, John (Shawn) Miller Jr., Danny (Julie) Miller; Michael (Heather) Grady, Angela (Scott) Smith, and Sherri (Matthew) Evans; grandchildren, Mindy (Brandon) Johnson, Joshua, Haley, Morgan, Izaac, Grady, Kadance, Dean, Dustin, Mickey, Kris, Cody, Kelsey, and Andrew (Kit) Sutter; 17 great grandchildren; sister, Mary Obermeier; in-laws, Bruce (Mindy) Crum and Beth (Scott) Gaubatz; as well as numerous nieces, nephews and great friends. John is preceded in death by his son Scotty; his parents and grandparents; grandson, Klint Blackdeer; great-granddaughter, Brycelynn Blackdeer; brothers, Larry, Tony, Kenny and Donny; and brother-in-laws, Merlyn Obermeir and Bill Crum.

The family of John Leo Miller Sr. created this Life Tributes page to make it easy to share your memories.

Send flowers to the Miller family.