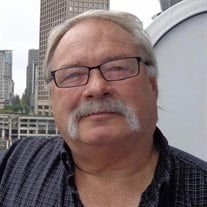 John Anthony Marino, 68, of Clear Lake, died from the coronavirus disease on Thursday, November 26, 2020, at MercyOne North Iowa Medical Center in Mason City. Visitation will be held from 5:00-7:00 p.m. Monday, November 30, 2020, at Ward-Van Slyke Colonial Chapel, 310 1st Ave. N., Clear Lake. A Celebration of Life will be held at a later date. In lieu of customary remembrances, memorial contributions may be directed to John’s family to be dispersed among his local interests and passions. John was born December 11, 1951, the son of Harold and Corrienne (Nielson) Marino in Marshalltown, IA. He married Linda Halsne on November 24, 2007, in Mason City. John graduated from Clear Lake High School in 1970. He worked for Dean Snyder Construction prior to working as an assistant to the city building inspector. He became Clear Lake’s building inspector in 1984; retiring in April of 2015. He was currently working as Ventura’s Building Inspector. John was the Range Officer for the River City Rifle and Gun Club in Mason City. He was very handy, could fix anything and liked construction. He remained active throughout his life riding RAGBRAI, playing rugby in Mason City and going for several motorcycle rides. He also had a passion for raising horses and breaking them to ride. Most of all, he loved and cherished the time he spent with his family; especially his grandchildren. John is survived by his wife, Linda Marino of Clear Lake; children, Stephanie (Chris) Waters of Mason City, Jodi (Craig) Mayland of Clear Lake, Lisa Halsne of Mason City and Scott (Brandi) Halsne of Clear Lake; grandchildren, Alyssa, Isaac, Braeden, and Bella Waters, Carter and Jordan Mayland, and Kayla and Jack Halsne; brother-in-law, Rex (Sheryl) Mueller; siblings, LeeAnn (Mark) Hogg, Sherry (Dave) Kukes and Scott (Celina) Winders; and special pet, Toby. He was preceded in death by his parents and sister, Debbie Mueller.

The family of John Anthony Marino created this Life Tributes page to make it easy to share your memories.

John Anthony Marino, 68, of Clear Lake, died from the coronavirus...

Send flowers to the Marino family.