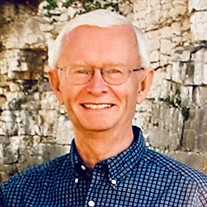 Dr. John H. Brinkman, 84, of Mason City, Iowa, passed away peacefully at Mercy One North Iowa Hospice surrounded by family, on April 3 2021. John was born in Ames, Iowa on December 29, 1936, the son of Dr. and Mrs. N.H. (Mildred Kimberley) Brinkman. He grew up in Colo, Iowa, graduating from high school in 1955, and was always very proud to call that community home. During his youth, he enjoyed working on his Uncle Harold's farm where he saved a friend from drowning at the farm pond, receiving the Carnegie Medal from Philadelphia for his brave actions. Following graduation, John attended Kemper Military School in Kirksville, Missouri, then attended the University of Iowa, receiving his Doctor of Medicine degree in 1962. It was during his internship in Houston, Texas where he met and married his wife of 57 years, Maxine Brand. They moved to Minneapolis, Minnesota, where John completed his residency in Internal Residency, receiving an NIH Fellowship in Endocrinology with the VA through the University of Minnesota. He also served in the U.S. Army as a Medical Corp Captain in Honolulu, Hawaii during the Viet Nam build-up. John and Maxine moved to Mason City, Iowa in 1962. During that time he was an internist at Park Clinic and at Mercy Medical Center. His illustrious career as a physician leader included his roles with the Iowa Foundation for Medical Care, the Iowa Medical Society, the Iowa Board of Medical Examiners, as a fellow with the American College of Physicians and the American College of Endocrinology, and as Mason City Health Director for sixteen years, among many others. He was a Clinical Associate Professor of Internal Medicine of Carver College at the University of Iowa, training medical students and residents, and in 2004, he had the honor of receiving the Carver College of Medicine Distinguished Service Award. His greatest professional joys were often found in serving the elderly and in his interactions with area farm families, where he enjoyed visiting about crops and trading stories and recipes. John was a lifelong member of the AMA, IMS, the Cerro Gordo County Medical Society, and Alpha Omega Alpha. He also served as a Board member for the both the Newman Foundation and the North Iowa Fair Association, and was a Boy Scout leader for the Hoover troop. After practicing as a physician for forty years, John retired in 2002, continuing to serve where needed until 2010. In retirement, he enjoyed spending time with his family, going on fishing trips to northern Minnesota and Canada with his brother, Harold, and brother-in-law, Dean, making homemade pickles and fudge, reading biographies and historical novels, and walking his beloved pug, Suzy. John was a very beloved husband and a loving and dedicated father who will be greatly missed by his family and friends. He is survived by his wife Maxine, children Paul (Lisa), Sarah, and David (Will), four grandchildren Peter, Lucy, Carl, and Sophie, his brother Harold, and sweet pug Suzy. He was preceded in death by his parents, his sister Mary, brother-in-law Dean, and nephew John. Memorial contributions can be made to Hawkeye Harvest Food Bank, the Mason City Public Library or the University of Iowa Foundation for Medical Student Scholarships. Family graveside services will be held at a later date.

The family of John Henry Brinkman created this Life Tributes page to make it easy to share your memories.

Send flowers to the Brinkman family.