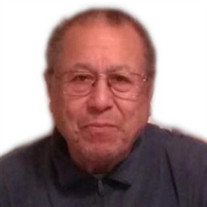 Jesus Ochoa Sr., 81, of Fertile passed away Thursday, December 23, 2021 at MercyOne North Iowa Medical Center in Mason City. Private funeral services will be held in his honor. He will be laid to rest at Brush Point Cemetery near Fertile. Jesus Ochoa was born May 12, 1940 in Belmond, IA, son of Mariano and Maria (De Jesus Rayos) Ochoa. Life took him all over the United States, following work from Texas to Minnesota, Oregon, Washington, North Dakota, Wisconsin and Iowa. For many years he worked in the fields of the Midwest in the summer and traveled back to the south for the winter. Jesus was a man of many skills. He worked as a farmhand tending to animals, farmed and also operated farming machinery and vehicles. He constructed multiple dwellings over the years with his own two hands, all of which he did striving for perfection. On April 23, 1959 he married the love of his life, Blanca Garcia in Crystal City, Texas and they were blessed with 13 children. In the 80’s they made their home in Fertile where they reconstructed a small house into a large, long-term home for their family. Jesus was also known for his cooking skills and having the ability to utilize his garden’s harvest to make delicious meals. His mornings usually started before sunrise, and his favorite music was always playing in the background. He looked forward to family gatherings and enjoyed decorating for the holidays. Jesus had perfectionist tendencies and only accepted the best quality work, from him and those he loved. Those left to cherish his memory are his beloved wife, Blanca; children Jesus Jr. Ochoa of Fertile, Dora Paulson of Mason City, Norma and Kevin Mensch of Manly, Baltazar and Irma Ochoa of Hanlontown, Melchor Ochoa of Forest City, Corina and Chane Grooms of Wesley Chapel, FL, Rene Ochoa of Vista, CA, Olga Ochoa of Des Moines, Israel and Nicole Ochoa of Forest City, Maria Ochoa of Vancouver, WA, Bernadette Ochoa of Fertile, and Lucas Ochoa of Forest City; grandchildren, Sonja and Uzman Sarfraz, Cynthia Ochoa, Ryan Paulson, Sirena Grooms, Sevanah Thomas, Antonio Thomas, Gabriel Clarke, David Mensch, Kassandra Clarke, Ethan Ochoa, Natasha Ochoa, Brandon Ochoa, Miah Ochoa, and Cruz Ochoa; siblings, Idalia Viesca and Rojelio Ochoa; as well as numerous extended family members and cherished friends. Preceding him in death are his parents, Mariano Ochoa Sr. and Maria Ochoa; brothers, Mariano Ochoa Jr., David Ochoa, and Rafael Ochoa; and a son, Gaspar Ochoa.

Jesus Ochoa Sr., 81, of Fertile passed away Thursday, December 23, 2021 at MercyOne North Iowa Medical Center in Mason City. Private funeral services will be held in his honor. He will be laid to rest at Brush Point Cemetery near Fertile. Jesus... View Obituary & Service Information

The family of Jesus Ochoa Sr. created this Life Tributes page to make it easy to share your memories.

Send flowers to the Ochoa family.