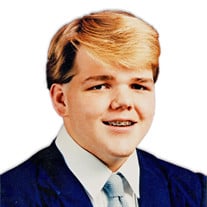 Jerry Mosiman, 52 of Mason City passed away suddenly Friday, July 9, 2021. A funeral service will be held 11:30 a.m. Tuesday, July 13, 2021, at Hogan-Bremer-Moore Colonial Chapel, 126 3rd St. NE, Mason City, IA. He will be laid to rest at Riverside Cemetery, Charles City, IA. Visitation will be held one hour prior to the funeral at the chapel. In Lieu of customary remembrances, memorials may be directed in care of Jerry’s family. Jerry Robert Mosiman was born September 26, 1968, in Mason City, the son of Robert Herbert and Karol Joy (Mannetter) Mosiman. He attended North Central High School in Manly, graduating in 1987 and went on to continue his education at NIACC and later Northwest Missouri State. For over twenty years Jerry worked for Kelly Services/Kraft. Jerry found happiness in crafting. Whether it was needlework or embroidering, Jerry created many beautiful pieces. He was very handy and never turned down a good musical, especially a classic on VHS. Those left to cherish his memory are his mother, Karol Mosiman of Mason City; his brothers, Jeff (Shelley) Mosiman of Nora Springs and Jason Mosiman of Mason City; nephew, Garrett; half siblings, Angela Marie (Donnie) Thompson and their son, Charlie, and Nick (Kelly) Mosiman and their sons, Robert and Oliver; as well as aunts, uncles, and extended family members. Preceding him in death are his father, Robert; his maternal grandparents, O.A. and Melinda Mannetter; paternal grandparents Archie and Dorothy Mosiman; and a sister-in-law, Tammy Mosiman.

The family of Jerry R. Mosiman created this Life Tributes page to make it easy to share your memories.

Send flowers to the Mosiman family.