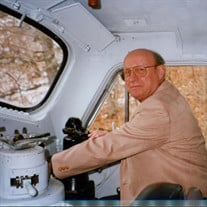 Jerry Ray Kolpek, 83, passed away Thursday, December 31, 2020, at MercyOne North Iowa Hospice, Mason City, IA. A private graveside service will be held at Memorial Park Cemetery. A public celebration of life will be held at a later date. Jerry, the son of Charles and Dorothy (Klunder) Kolpek was born April 25, 1937 in Mason City, IA. He attended and graduated in 1955 from Silver Lake High School in Silver Lake, MN. Jerry began working on the Chicago Milwaukee, St. Paul & Pacific Railroad in Mason City, IA in 1955 as a fireman. He was promoted to locomotive engineer in September of 1963. On September 5, 1964 Jerry was united in marriage to Betty Jean Brink and the couple had two children together, Kristie and Douglas. They started their life together in Mitchell, SD and moved to the Mason City, IA area where they resided for many years. Jerry honorably served his Country in the United States Army as a radio maintenance technician stationed in Hawaii and was honorably discharged in 1966. On June 27, 1981 Jerry married Jo Janet Slade (Jameson) at the Little Brown Church in Nashua, IA and lived in Clear Lake, IA before moving to Mason City, IA. In 1986 Jerry became General Chairman of the Milwaukee Road/Soo Line Railroad and his wife Jo served as secretary until their retirement on July 1, 1999. Jerry and Jo moved from Mason City, IA to Bella Vista, AR on July 20, 1999. They bought a home on a golf course and spent much of their time playing golf in the winter. They would spend summers at their lake home in Cross Lake, MN and enjoyed boating and fishing. Jerry was an avid Minnesota Gopher fan and attended virtually every home game until 2014 when the couple returned to Clear Lake, IA to be closer to family. On April 19, 2019 the couple returned to the Little Brown Church to renew their wedding vows. Those left to cherish memories of Jerry are his children, Kristie Whitehill (Kolpek) of Mason City, IA and Douglas (Alyssa) Kolpek of Ankeny, IA; his grandchildren McKenna Whitehill, Emma Kolpek, Kallie Whitehill and Brian Kolpek; siblings Larry (Jean) Kolpek of Mason City, IA and Lanny (Carol) Kolpek of Rochester, MN. Jerry was preceded in death by his parents and wife Jo. Memorials may be directed to the family at the address of 2515 S Lakeview Ct, Unit 403, Clear Lake, IA 50428.

The family of Jerry Ray Kolpek created this Life Tributes page to make it easy to share your memories.

Send flowers to the Kolpek family.