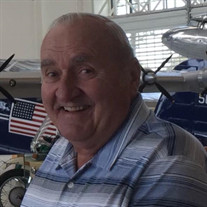 Jerry Vincent Hejna, 83, of Ventura, passed away at his home on Sunday, November 28, 2021. A private funeral service will be held Tuesday, December 7, 2021, at Ward-Van Slyke Colonial Chapel, 310 1st Ave. N., Clear Lake, with Rev. Scott Kozisek officiating. Visitation will be open to the public from 5:00-7:00 p.m. Monday, December 6, 2021, at the funeral home. Jerry was born September 20, 1938 at his childhood home in Hancock County to Frank and Agnes (Korn) Hejna. He attended Ventura High School where he graduated in 1956. After high school, Jerry worked briefly as a phone line installer at Northwestern Bell, where he met the love of his life, Joann Smidt. They were united in marriage on May 28, 1960 at Holy Family Catholic Church in Mason City. Jerry and Joann had two sons, Jerry Alan Hejna (1962) and Michael John Hejna (1969). Together as a family, they enjoyed many amazing trips, snowmobiling, fishing, camping, and countless nights at the racetrack. In their later years, Jerry and Joann loved spending time together at their boat in Red Wing, MN and going for their daily lake lap in Clear Lake. Alan and Mike blessed Jerry with many memorable trips in the last six years, including his favorite to Howard Hughes’ Spruce Goose airplane in Oregon, the Navy Shipyards in Norfolk, VA, and most recently to Mount Rushmore in September. Jerry began his dream job as an Auto Mechanic at Ransom’s Auto Service in Ventura in 1956 until he was called to the Army in 1961. When Jerry returned to Ventura in 1963 after receiving honorable discharge, he went back to working at Ransom’s until he bought out the business in the mid-1960’s. Jerry and Joann owned and operated Hejna Auto Service until 1991. Jerry then drove truck for Nieman, Ltd. for ten years until his retirement in 2001. During his lifetime, Jerry had many accomplishments: Ventura town cop in the mid 1960’s, Ventura’s mayor from 1976-1980, and our family favorite, four-time track Champion at Mason City Speedway 1964-1967. Dirt track racing was a huge part of Jerry’s life since he began his racing career in 1964. He raced Hobbie Stock, Super Stock, and Late Model. He “retired” from racing in 1972. The Hejna Racing legacy continued in 1984 when Alan started his racing career. Mike joined in on the fun in 1988 and Hejna Bros Racing was born. The three of them made a great team and spent countless nights at the shop and the track. As Crew Chief, Jerry put a lot of love, sweat, and tears into building many championship motors for his boys. As Honorable Crew Chief in his later years, Jerry was a fixture on the front stretch of the Mason City Motor Speedway cheering on Alan. Next summer, he will have the best seat in the house. Jerry was so proud of his boys and their successful businesses in Clear Lake. He enjoyed spending time at Rookies in the mornings making sure the beer was cold and catching up with his boys and a few ol’ pals. Jerry “Papa” is fondly remembered by his loving wife of 61 years, Joann (Smidt) Hejna; sons Alan and Michael (Stephanie) Hejna, Clear Lake; grandson Kyle Hejna (Kallie Campbell), Clear Lake; granddaughter Morgan (Ryne) Staley, Clear Lake; granddaughter Madison Hejna, Clear Lake; granddaughter Nicole Nosbisch, Clear Lake; grandson Connor Nosbisch, North Liberty, IA; great-grandchildren Jameson and Brooklyn Staley; brother Ron (Rosie) Hejna, Garner, IA; and many nieces and nephews. He was preceded in death by his parents, Frank and Agnes; infant brother Joseph; and brothers Frank Jr. and Ed Hejna.

The family of Jerry Vincent Hejna created this Life Tributes page to make it easy to share your memories.

Jerry Vincent Hejna, 83, of Ventura, passed away at his home...

Send flowers to the Hejna family.