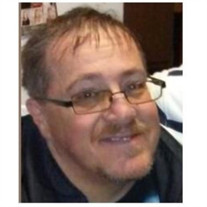 Jerome “Jerry” Coolidge, 60, of Mason City Iowa passed away on November 14th, 2020 at Good Shepherd Health Center in Mason City due to long term health issues and Covid 19. Per Jerry’s wishes, there will not be a funeral. Jerry Coolidge was born in Omaha, Nebraska, on October 9th, 1960 along with his twin sister Jackie, the youngest son of Donald and Patricia (Dispensa) Coolidge. He attended school in Omaha, Nebraska as well as South Minneapolis. At a young age, Jerry knew that he wanted to follow in his brother Bob’s foot steps of being a boxer. He was a Golden Gloves champion many times over and eventually had some success as a professional boxer, just like Bob. Jerry also wanted to follow in all his brothers’ footsteps by joining the military, but a variety of health issues kept him from fulfilling that dream. In 1983, Jerry met the mother of his children in Princeton, MN. He and Kris were married the day before his birthday in October of 1983 in Milaca, MN and to this union were born Jennifer Ann in October of 1985 and Jonathan Wayne in September of 1987. Although the marriage ended 16 years later…the friendship and loyalty never did. Jerry was well known for having a heart of gold, and never knew a stranger. He may not remember your name the next time he saw you, but he never forgot a face. “Hey Guy!” or “Hey Young Lady!” was a typical greeting you could plan on hearing because that meant exactly that he couldn’t remember your name. A mountain dew and newspaper in hand, you could find him walking almost anywhere because he loved being outdoors. One favorite story is when Jerry rode his 10-speed bike from Princeton to Minneapolis just because he wanted to see if he could do it…and he did. Jerry is survived by his daughter, Jenni Coolidge, (Fiancé Ray Hines) their children, Brody Smojice, Maaliyah Coolidge, RayJ Hines, and Giovanni Hines of Mason City, IA and his son, Jon Coolidge, (wife Stephanie) and their children Jacob Schoby and Tristan Coolidge of Clear Lake, IA. Sisters: Val Larose (Joe) of Chester, IA, Theresa Gale (Steve) of Pflugerville, TX, Donna Segerstrom (Mike) of Wellton, AZ, DeAnn (Ken) Lovitz of Saint Cloud, MN, Jackie (Mark) Peterson of Pahrump, NV. Sister in law Bonnie Coolidge, of Braham, MN and an extremely large extended family including numerous generations of nieces and nephews, Aunt Carmen (Coolidge) Allen of Arizona and Uncle Cecil Coolidge of Brainerd, MN and numerous cousins. Jerry was preceded in death by his parents Don and Patricia Coolidge, brothers Robert, James and John Coolidge, special friend Bill Bushy. We, his family, invite you to raise your glass in a toast to a life well lived and remember your own favorite story of Jerry.

The family of Jerome M. "Jerry" Coolidge created this Life Tributes page to make it easy to share your memories.

Jerome “Jerry” Coolidge, 60, of Mason City Iowa passed away on...

Send flowers to the Coolidge family.