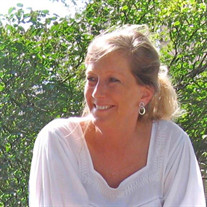 Jennifer M. Mackey Scholl, 56, of Waukee and formerly of Mason City, passed away Tuesday, April 27, 2021 at the Taylor Hospice House in Des Moines, Iowa. A private graveside service will be held Friday, April 30, 2021 at Memorial Park Cemetery, 11495 265th St., Hwy. 122 West, Mason City, with Rev. Josh Link, celebrant . A Celebration of Life will be held 5:00 p.m. to 8:00 p.m. Saturday, May 1, 2021, at West End Architectural Salvage, 22 9th Street, Des Moines, Iowa, where she will be recognized by the Nursing Honor Guard. In lieu of flowers, memorial contributions may be directed to the family and a nursing scholarship will be established at Unity Point. Jennifer was born January 23, 1965 in Le Mars, Iowa, daughter of Lyle and Lorraine (Freilinger) Mackey. She graduated from Newman Catholic High School, class of 1983. Following high school, Jennifer attended college and worked for Aunt Maudes Restaurant in Ames, Iowa and Greenbriar in Johnston, Iowa. She attained her nursing degree at Iowa Methodist School of Nursing, class of 1999. Jennifer began a twenty-two year avocation at Younker 8 Iowa Methodist (Unity Point) in Des Moines, Iowa, she said, “nursing was never a job, it was a passion that she was paid for”. In her career Jennifer, made a huge impact not only on her patients, but had a nurturing influence with her coworkers and physicians and was an important mentor to the new nurses that joined her working family. Jennifer was united in marriage to Gary Scholl on October 2, 2010 in Des Moines, Iowa and to this union Gary brought one son, Connor Scholl into the family. They made their home in Waukee and during that time she rescued two awesome kittens, Mac and Marty. Jennifer and Gary during their marriage, they liked to travel to Mexico, Hawaii, and the California coast and looked forward to the MAC week. Jennifer had an active appreciation for beautiful things. She enthusiastically supported local artists by purchasing their original work and displaying those pieces in an inspiring and restorative home environment. Jennifer worked hard; when she was not working she had an insatiable thirst for adventure and experiences. Jennifer was survived by her husband, Gary Scholl of Waukee; step-son, Connor Scholl of West Des Moines; mother, Lorraine Mackey of Mason City; seven siblings, Christine (Mark) Althoff, Douglas (Sharon) Mackey, Susan (Joseph) Henry, Jill (David) Campbell, Ann (Thomas) Weiss, Carey (David) Nisi, Katie (Arian) Schuessler; father in-law, John (Hazel) Scholl; father in-law, Mick Boyd; two sisters in-law, Toni (Lonny) Attebery and Kris Barrett, many nieces, nephews, two kittens, Mac and Marty. Jennifer is preceded in death by her father, Lyle Mackey; mother in-law, Diane Boyd and brother in-law, Jerry Scholl. The family would like to recognize Dr. Behrens and his team, Unity Point Hospice (especially Sandy Howard) and Taylor House Hospice staff for their compassionate and professional care.

The family of Jennifer M Scholl created this Life Tributes page to make it easy to share your memories.

Jennifer M. Mackey Scholl, 56, of Waukee and formerly of Mason...