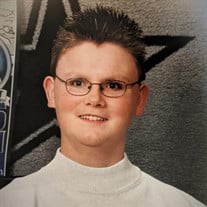 Jeffrey B. Asche, 35, of Clear Lake left our world too soon after a courageous battle with Muscular Dystrophy Duchenne on Saturday, February 6, 2021 at MercyOne North Iowa Medical Center in Mason City. Per his wishes, cremation has taken place. The family invites friends to join them in their home, 711 South 3rd Street, Clear Lake, IA on Saturday, February 13, 2021 from 3:00 p.m. to 6:00 p.m. They ask that photos and memories be brought and shared. If there are any changes due to weather, updates may be found here on Jeffrey's memorial page. Jeffrey Brian Asche shared a birthday with his grandfather, James Collen, April 1, 1985 and was born in Mason City, a son of Gerald D. and Barbara (Collen) Asche. Three brothers greeted him at home, James, Todd and Greg. Growing up Jeff attended Clear Lake Middle School, and later Dows and Latimer High Schools. Jeff looked forward to traveling with his family, whether it was his MakeAWish trip to Epcot, SeaWorld, and Disneyland, family reunions, or even a trip around town made Jeff happy. He continued his education at NIACC with dreams of becoming a video game engineer or tester. He enjoyed video games, whether he was playing himself or watching YouTube videos of others playing. Jeff was an avid sports fan. He and his mom, Barb, were constantly cheering on the Clear Lake sports teams, and Jeff was just recently gifted a signed basketball by both the girls’ and boys’ teams. He also loved the Iowa Hawkeyes and was a true Cowboys fan. Though Jeff’s life brought him many obstacles, he was constantly overcoming the next task with a smile. He let very little get in his way and always found a new way to continue on. Jeff’s family was the most important part of his life, spending time with his brothers and many beloved nieces and nephews brought him joy. Those left to cherish is memory are his mom, who had been at his side from the beginning, Barbara Asche of Clear Lake; his brothers, Jim (Rozie) Bird of Belmond, Todd (Cindy) Bird of Gladbrook, and Greg (Jen) Asche of Garner; nieces and nephews, Angie Soma, Crystal Halsne, Sigourney Gosen, Sapphire Bird, Hali Daters, Cobren Bird, Daniela Milan, Dominic, Brian and Elena Asche; nine great nieces and nephews and one on the way; as well as numerous extended family members and friends. Preceding him in death are his father, Gerald Asche; maternal grandparents, James and Florence (French) Collen; and paternal grandparents, Klaus and Alvina (Pals) Asche.

Jeffrey B. Asche, 35, of Clear Lake left our world too soon after a courageous battle with Muscular Dystrophy Duchenne on Saturday, February 6, 2021 at MercyOne North Iowa Medical Center in Mason City. Per his wishes, cremation has taken place.... View Obituary & Service Information

The family of Jeffrey Brian Asche created this Life Tributes page to make it easy to share your memories.

Jeffrey B. Asche, 35, of Clear Lake left our world too soon after...

Send flowers to the Asche family.