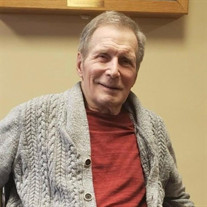 Jay E. Treloar, 76, passed away Saturday, March 13, 2021 at the Madrid Home in Madrid, Iowa. A service will be held at a later time and will be held at the Spring Grove Cemetery. Memorial contributions may be directed to the Lime Creek Nature Center. Jay was born August 22, 1943 in Mason City, son of Howard and Elizabeth (Taylor) Treloar. He graduated from Nora Spring High School, class of 1961. A fervent athlete, he was the captain of both the Wrestling and Football team and received All Conference Honors his Senior year. After high school he attended Mason City Jr College (now known as NIACC) where he would continue his athletic career playing football for the MCJC Trojans. Soon thereafter, he enlisted into the Air Force serving in the Vietnam War and was later honorably discharged. He spent several years working for Winnebago and Kraft Foods but always made time to help working outdoors on the family farm. He was very passionate about the outdoors and loved camping, horseback riding and long bike rides through Lime Creek and the Greenbelt. Jay was an excellent story teller, often sharing stories about memorable camping trips, his time spent in Alaska and other past experiences. He was an extremely social man who brought a good joke and an infectious laugh everywhere he went. He remained extremely active into his later years and loved playing volleyball and sharing a cocktail with friends. In his down time, you could find him sipping sun tea while napping in his hammock or wearing his favorite fuzzy slippers watching Country Western movies in his chair. Jay was also an avid reader as evidenced by his extensive collection of timeless literature. Jay was loved and adored by many and is survived by his two children, Jayson (Billie) Treloar and Jennifer (Brian) Nelson; eight grandchildren, Willow, Oliver, Delia, Brandon Jay, Jesica, Taylor, Brady, Jillian; three great grandchildren, two brothers, Ross (Lori) Treloar and Robert (Judy)Treloar, many cousins, nieces and nephews.

Jay E. Treloar, 76, passed away Saturday, March 13, 2021 at the Madrid Home in Madrid, Iowa. A service will be held at a later time and will be held at the Spring Grove Cemetery. Memorial contributions may be directed to the Lime Creek Nature... View Obituary & Service Information

The family of Jay Treloar created this Life Tributes page to make it easy to share your memories.

Send flowers to the Treloar family.