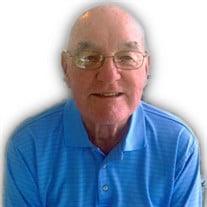 Jay Donald “Pete” Craven, 84, died surrounded by his loving family on Monday, March 15, 2021 in his Mason City home. Family will be greeting the public from 5:00pm to 7:00pm on Monday, March 22, 2021 at Hogan Bremer Moore Colonial Chapel, 126 3rd St, Mason City, IA in honor of Pete’s life. A Scriptural Wake Service with a time for sharing will begin at 6:30pm Monday, March 22, 2021. Family will have a private burial at Elmwood St. Joseph Cemetery in Mason City, IA. A public Mass of Christian Burial will be held at a later date. Pete was born on March 22, 1936, the son of Don and Sis (Hall) Craven of Mason City, IA. He was a graduate of St. Joseph’s High School, Class of 1954. Pete was drafted into the Army in 1958. Before being shipped out to Augsburg, Germany, he married Mary Koenigsfeld at Fort Dix, NJ on April 30, 1959. The newlywed couple lived together in Germany until Pete was discharged in 1960. From this union, two daughters were born. After living in New Jersey for several years, the family moved back to Mason City, Iowa. Pete was first employed as an auditor for Agri Grain Marketing and was later employed as the manager at the Farmers COOP, Grafton, IA, for 30 years. He retired in 2000. Pete was known as a kind and genuine man who was always quick with a smile. He was an avid golfer since the age of ten, and most days you could find him at Highland Park Golf Course where he was a member for over 50 years. He was also the secretary/treasurer for the Men’s Club, volunteered with the junior golf program, and received the Shining Star Award for outstanding service. He even scored a hole-in-one 4 times! He was a devoted husband, father, grandfather, and friend to many, who will be greatly missed. Those left to cherish memories of Pete are his wife of 62 years, Mary; daughters, Lori (Mark) Long, Lisa Craven (Austin Johnson); grandchildren, Paige Florschuetz, Brooke Florschuetz; siblings, Judy Craven, Susan (Allan) Ertl; along with numerous extended family members and great friends. Pete is preceded in death by his parents; his parents-in-law; as well as several of Mary’s siblings. Pete’s family would like to thank MercyOne North Iowa Hospice for the wonderful care they provided, with a special thanks to Rob Grayson and Jessica Peterson.

The family of Jay Donald "Pete" Craven created this Life Tributes page to make it easy to share your memories.

Send flowers to the Craven family.