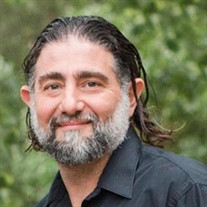 Jason James Monarch, 46, died on Tuesday, December 14, 2021. A Visitation will be held from 1:00pm to 5:00pm on Sunday, December 19, 2021 at Hogan-Bremer-Moore Colonial Chapel, 126 3rd St NE, Mason City, IA. In Jason's Hometown a visitation will be held from 4:00 pm to 6:00 pm on Wednesday, December 22, 2021, at the Huff Chapel, Franklin, Pennsylvania. Jason was born on May 3, 1975, the son of James “Goo” and Evie (Parrotto) Monarch of Franklin, PA. He was a graduate of Rocky Grove High School. After High School he enlisted into the Army for four years. After an honorable discharge, Jason received his Masters in Business Administration at Clarion University in Pennsylvania. On June 7, 2003, he married Nicole Gatto in Franklin, PA, from this union two daughters were born. His hospital work experience has taken Jason and his family across the United States with positions in Pennsylvania, California, and lastly Iowa. Jason could often be found at a local auction or garage sale looking for hidden treasures. One of his passions was playing cards, he especially enjoyed black jack and Texas hold’em. He recently had gotten back into playing racquetball. Those left to cherish memories of Jason are his wife, Nicole; children, Isabella and Rosa; parents, James “Goo” and Evie Monarch; sister, Karen (Dave) Samuels; parents-in-law, Nick and Kathy Gatto; brothers-in-law, Angelo (Daniela) Gatto and Joey (Victoria) Gatto; as well as seven nieces and nephews.

The family of Jason James Monarch created this Life Tributes page to make it easy to share your memories.

Send flowers to the Monarch family.