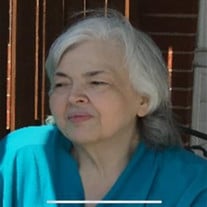 Janet Lee Hanna, 68, of Manly, passed away peacefully in her home on March 21, 2022, less than two weeks after losing her mother and best friend Dorothy Hanna on March 8. There will be a private graveside burial service with a later public memorial service and joint celebration of Janet and Dorothy's lives at the Bethel United Methodist Church in Manly at a date to be announced. Janet was born May 18, 1953, in Mason City, Iowa to parents Jack and Dorothy (Rademaker) Hanna. She was raised on the family farm west of Manly and attended Hanlontown Elementary and Junior High, before entering Manly North Central High School where she graduated in 1971. She would go on to obtain a certificate in cosmetology and worked as a beautician in Manly. In later years, she devoted her time to being the primary caregiver for her mother, when Dorothy was in declining health. In Janet’s early childhood she had a keen interest in horses and also a love of music. She was a proficient musician herself, learning the accordion and earning a place in Honor Band on the clarinet. As a pre-teen during the ‘British Invasion” she also collected Beatles albums and others in her music collection. As an adult, she was best known as “Aunt Janet” as she doted on her niece and nephews (and later their children), as well as children of other friends and extended family. She had an unblemished record (completely winless) in board games and other competitions with the children as she preferred to take her joy in seeing the kids’ beaming faces as they basked in their success. Janet was active in social media, reconnecting with many past friends from school and those she grew up with in Bethel United Methodist Church. Janet and her sister-in-law, Barb, also shared a close friendship from the time she was in high school until her passing. Again, Janet was the one often taking on the role of providing support and encouragement to others. She was especially moved in how that support was returned to her after Dorothy’s recent passing. Among the friends who assisted Janet later in life, the family would like to extend special thanks to Theresa Green and our cousin Judy Horning. Janet was also preceded in death by her father, Jack; her sister, Marsha, aunt and uncle, Norma and Alfred Happel; aunt, Mary Chisholm; and cousin, Sandy (Chisholm) Linderman. She is survived by brothers, Mark (Barb) Hanna of Ogden Iowa, and Lyle (Terri) Hanna of Katy, Texas; niece, Sonya (Brett) Nichols of Boone Iowa; nephews Jess (Erin) Hanna of Silvis, Illinois, and Trey Hanna of Katy, Texas; grandnephews, Alec Nichols of Ames, IA; AJ and Andrew Hanna of Silvis, Illinois; and grandniece Aleyna Nichols of Ames, IA; as well as numerous cousins, friends and relatives.

Janet Lee Hanna, 68, of Manly, passed away peacefully in her home on March 21, 2022, less than two weeks after losing her mother and best friend Dorothy Hanna on March 8. There will be a private graveside burial service with a later public... View Obituary & Service Information

The family of Janet Lee Hanna created this Life Tributes page to make it easy to share your memories.

Janet Lee Hanna, 68, of Manly, passed away peacefully in her...

Send flowers to the Hanna family.