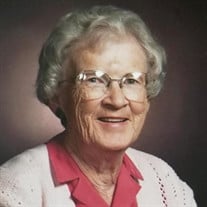 Jane Janell McMullen, a long-time resident of Northwood, Iowa, passed away on April 30, 2022 at age 91. A Funeral Service will be 11:00am, Saturday, May 7, 2022 at the Northwood United Methodist Church, 1000 1st Ave N, Northwood. Burial will be held in Sunset Rest Cemetery, Northwood. Visitation will be held 9:30am to 10:30am, Saturday, May 7, 2022 at Conner Colonial Chapel, 1008 1st Ave S, Northwood, prior to the funeral service at the church. Jane was born in Algona, Iowa on February 18, 1931, the first child of Wayne and Doris Keith, who farmed outside of Burt. Jane attended Portland School, a one-room country schoolhouse, through 8th grade. As a girl she did farm chores, rode a pony, and was active in 4-H, winning a blue ribbon at the State Fair. On snowy days Jane sometimes rode to school in a neighbor’s horse-drawn sleigh, holding a baked potato (for lunch) to keep her hands warm. She attended Burt High School, where she met her future husband, Jack, and graduated in the Class of 1948. At Iowa State Jane majored in Home Economics. She married Jack in 1952, wearing a wedding dress she made herself, and as an Air Force wife lived in Tucson, Arizona and Salina, Kansas. Daughter Cheryl joined the family in 1954 and son Ron in 1955. In Havelock, Iowa Jane taught Home Economics for a year and later subbed in West Bend. The family moved to Northwood in 1960, where Jane was active as a 4-H leader and judge, PEO member, a regular at the Methodist church, and an avid reader. She was a good cook, great seamstress, hands-on mother, and enjoyed gardening and canning. Jane sewed dolls, quilts, seasonal decorations, and clothes to order for family members and people in Northwood. She was a daycare provider to five teachers’ kids once Cheryl and Ron left home. After Jack retired, most days they played a game of cribbage and two-handed pinochle before doing the lunch dishes – and kept a year-long tally of who won. They spent many winters in the Rio Grande valley of Texas and enjoyed the warm weather and active social life. Once the three grandsons arrived, they could count on traditional meals, fun games, and family stories at Grandma and Grandpa’s. They sometimes got home-made pajamas for Christmas. Jane and Jack frequently visited Cheryl and Alek in Sioux City, and traveled to the Dominican Republic, South Africa, and Fiji to visit Ron, Jane, Owen, and Wyatt. As Jane never learned to swim, while on a bamboo raft outing in Fiji she had to be carried across a strong-flowing stream by two burly Fijian villagers. Jane was at home for two years after Jack died in 2017, but a fall and broken hip landed her in the Lutheran Retirement Home in 2019. The family is grateful for the care and attention she received there. Although her short-term memory faded, she remained chipper, uncomplaining, and pleasant while living in the moment. She died peacefully while birds sang at the feeder just outside her window. She was preceded in death by her parents and brother Edgar (Joyce) and is survived by sisters Mary Yeoman and Peg Heald, children Cheryl and Ron (Jane), grandsons Owen (Chelsea), Wyatt (Sarah), and Alek (Rowan), great-grandson Silas, and many nieces and nephews.

Jane Janell McMullen, a long-time resident of Northwood, Iowa, passed away on April 30, 2022 at age 91. A Funeral Service will be 11:00am, Saturday, May 7, 2022 at the Northwood United Methodist Church, 1000 1st Ave N, Northwood. Burial will... View Obituary & Service Information

The family of Jane Janell McMullen created this Life Tributes page to make it easy to share your memories.

Send flowers to the McMullen family.