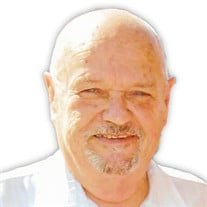 Manly - James Leroy Morehead, 85, of Manly passed away Friday, May 21, 2021 at the MercyOne North Iowa Hospice Unit in Mason City with his family at his side. A funeral service to honor his life will be held 12:00 p.m. Wednesday, May 26, 2021 at Bride Colonial Chapel, 110 E. Spring Street, Manly, IA.. He will be laid to rest at Manly Cemetery. Visitation will be held one hour prior to the funeral at the chapel. Memorials may be directed to MercyOne North Iowa Hospice or the Manly Specialty Care. James Leroy Morehead was born June 3, 1935 in Lenore, Kansas, the son of Leo and Lorene (Cleveland) Morehead. Growing up in Kansas, James enlisted into the United States Marines and began his service to his country. He served as a Sergeant until his honorable discharge in April of 1962. On August 15, 1953 James married Katherine Bowman in Sidney, Nebraska. The couple was blessed with four children: Kenneth, Brenda, Steven who passed away young, and Linda. The family moved to Manly where the couple made their home for many years. Jim and Kathy owned and operated Kathy’s Kitchen before creating the Manly Hardware and Variety Store and running it for many years. Jim was quite the singer and played guitar in Gene Piper and the Northern Cowboys and later the Country Express. He and Kathy took many trips to South Dakota and were excited to share the adventure with their family and grandchildren. For many years Jim worked as a school bus driver, and later as a charter bus driver. This led to many trips to casinos, fishing trips, and sporting events all over the area where Kathy occasionally accompanied him. In his later years Jim enjoyed coin collecting: buying, selling and trading coins. Those left to cherish his memory are his children, Brenda Walters of Mason City, and Linda Novak of Mason City; son-in-law, Carl (Lynn) Walters of Altoona; grandchildren, Amber Morehead, Amanda (Ryan) Neff, Melissa (Nick) Doehrmann, Ryan Morehead, Andrea and her family, Becky and her family, and Christopher and his family of Iowa City; great-grandchildren, Lilly and Zane Zobel, Ella and Sofia Neff, Ayden and Brynlee Doehrmann; as well as extended family members. Preceding him in death are his beloved wife of 53 years, Kathy; children, Steven Morehead and Kenneth Morehead; mother, Lorene Rufenacht; granddaughter Lori Walters; and his beloved poodle, Fifi. The family would like to thank the staff of MercyOne North Iowa Hospice as well as the staff of Manly Specialty Care for their dedicated care of Jim. Bride Colonial Chapel. 110 E. Spring St. Manly, IA 50456. (641) 454-2242. ColonialChapels.com

Manly - James Leroy Morehead, 85, of Manly passed away Friday, May 21, 2021 at the MercyOne North Iowa Hospice Unit in Mason City with his family at his side. A funeral service to honor his life will be held 12:00 p.m. Wednesday, May 26, 2021... View Obituary & Service Information

The family of James Morehead created this Life Tributes page to make it easy to share your memories.

Send flowers to the Morehead family.