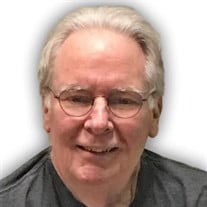 James “Jim” Raymond Sauer, 70, of Mason City, Iowa, passed away peacefully with his beloved wife, Danette, at his side, on February 2, 2022. A Memorial Mass will be held 10:30am Saturday, July 9, 2022 at Epiphany Parish - Holy Family Catholic Church, 714 N Adams Ave, Mason City, IA. A Celebration of Jim's Life will be held following the Mass at Noon, Saturday, July 9, 2022 at the Columbia Club, 551 South Taft, Mason City, IA. Online condolences may be expressed by visiting: https://www.colonialchapels.com/obituaries/James-Jim-Sauer/#!/TributeWall Jim was born on July 10, 1951 in La Crosse, Wisconsin, the oldest of five children raised by Raymond and Jeanne Sauer. He graduated in 1969 from Aquinas High School and in 1979 graduated with honors from Viterbo College earning a Bachelor of Science in Nursing degree. Continuing his love for the medical field, Jim graduated from the St. Francis School of Anesthesia in 1981, achieving his certification as a Certified Registered Nurse Anesthetist (CRNA). Anxious to begin his professional career as a CRNA, Jim would note that he graduated on a Friday and started practicing anesthesia the following Monday in Mason City, Iowa, where he began a distinguished 35-year career, retiring on December 31, 2016. Jim thoroughly enjoyed his profession, and he was well known for using his sharp intellect, quick wit, and entertaining demeanor to put patients at ease prior to anesthesia and surgery. He was particularly skilled at comforting children during pre-op conversations. Because of his expertise and abilities, patients and their families would routinely request that Jim be assigned to their scheduled surgery. The medical teams also held Jim in the highest regard and he loved his daily interactions with the physicians, nurses, aides and other personnel. Jim married Linda Waters on September 9, 1972, in La Crosse, and they had two daughters, Rebecca “Becca” Sauer, and Rachael Frayne. Linda passed away on December 16, 2014. Jim and Danette Zook were introduced by a mutual friend, fell in love, and were married on July 1, 2016. Jim had many interests and threw himself into them completely. He started scuba diving as an adult and became an advanced certified diver. He logged over 450 dives in the Caribbean, Mexico, Belize and several other locations. He not only enjoyed diving himself but loved introducing this adventure to others. Golf, motorcycle riding, target shooting, all types of music, particularly the Beatles, and playing the base guitar were all activities Jim loved. He was always an avid reader but in more recent years, as neuropathy prevented him from being physically active, he consumed books at an even more voracious clip. He often joked that his single largest living expense, besides buying his wife flowers, was his Kindle bill. When weather permitted, he liked nothing more than sitting on the patio from 7:30 a.m. until 2:00 p.m. reading an entertaining book and having a cigar, and those times were made even better when friends would join him for a good cigar. Jim was best known for his great sense of humor, and with little effort made certain that laughter was a central part of each day. He also loved Christmas and the joy he got in gift-giving, in particular for Maeve and Callum, his beloved grandchildren. He is survived by his wife, Danette Zook; daughters Becca Sauer and Rachel Frayne; son-in-law Josh Frayne; grandchildren Maeve and Callum Frayne; stepchildren, Angela (Dave) Schrumpf and John Zook; and mother-in-law Jean Kemna; by his siblings: Dave (Nancy) Sauer, Mary (Jeff) Paul, Tom (Debbie) Sauer, John (Kathy) Sauer; and brothers and sisters-in law: Sly and Jean Brumfield; Diane and Bhasker Dave, Daryl and Jan Kemna; Don and Shellie Kemna; Doreen and Tim Beddow; Duane and Kim Kemna; and many nieces and nephews. Jim was preceded in death by his parents Raymond and Jeanne Sauer, and first wife Linda (Waters) Sauer. Special thanks and gratitude are extended to the multiple medical teams who cared for Jim over the course of his illness, including Dr. Eli Muchtar MD with Mayo Cancer Center; Dr. Kevin Orcutt MD and the Medical and Radiation Oncology Teams of MercyOne North Iowa Medical Center; Dr. Sara Mechem and Jesse Watters, MercyOne Palliative Care; Doug with MercyOne Home Medical Equipment; and Dr. Amir Sajadian and the nursing staff of MercyOne North Iowa Hospice. Family and Friends will be notified once the date is determined for Jim’s Celebration of Life. Memorial donations are suggested to MercyOne North Iowa Hospice, Mason City, Iowa.

The family of James "Jim" Raymond Sauer created this Life Tributes page to make it easy to share your memories.