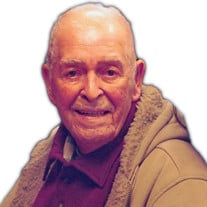 Jack D. Russel, 98 of Mason City, passed away Friday, August 6, 2021 at the IOOF home with family at his side. A Celebration of his life will be held 11:00 a.m Wednesday, August 18 at Hogan-Bremer-Moore Colonial Chapel, 126 3rd St. NE, Mason City, IA 50401 with Reverend Kenneth Gehling officiating. He will be laid to rest at Elmwood-St. Joseph Cemetery in Mason City, IA with military honors presented by the Mason City Veterans Honor Guard. The family will greet friends and relatives one hour prior to the service at the funeral chapel. The family would like to extend their most sincere gratitude to the IOOF Home for the loving care of Jack over the last two years. In Jack’s honor, memorials may be directed to the IOOF Home, 1037 19th St SW, Mason City, IA 50401. Jack Dean Russel was born December 10, 1922 in Mason City, the son of Robert and Eva (Williams) Russel. Growing up in town, Jack attended Mason City Schools before finding work at Thomas’ Machine Shop. It was here he learned the skills of a machinist, that would carry throughout his life. Before leaving for the Army Air Corp, his soon to be wife, June E. Younke, followed Jack out to Kansas City, KS, where the couple was married on May 6, 1943. The couple was blessed with three children, Scott, Jeanne, and Steve. Following Jack’s honorable discharge, the family made their home back in Mason City. In 1960 he began his 24 year tenure at Lehigh Cement, retiring in 1984. During his time at Lehigh, Jack taught night classes at NIACC in the machine shop. In 1993 June passed away, following a 20 year courageous battle with cancer. Jack’s hands were never still, after working a long week, he would come home for the weekend to utilize his skills building and repairing engines. His tools and supplies were always arranged with precision, and though anyone was welcome to borrow them, the tool better return in pristine condition. Time spent traveling with June, family picnics, baseball games and a good game of catch with the kids were always treasured. Even in his older years, his hands were not idle, constantly building the next project, helping construct a building, or tinkering on the next reconstruction. Jack could fix anything. He was always willing to lend a hand, to anyone that may need it. Becoming a grandpa was his greatest joy. He had a calming, caring demeanor that would ease any heart, and was a Father figure to many. His impeccable story telling will be missed, but each time his family picks up a tool they will remember that, “If you’re gonna do a job right, do it right the first time”. Those left to cherish his memory are his children, Scott (Barb) Russel of Chesapeake, VA, Jeanne Bergdale and Steve (Christine) Russel all of Mason City; grandchildren, Molly (Matt) McCracken, Matt (Mikki) Russel, Hannah (Justin) Miller, Lisa (Tony) Johnson, Amy Bergdale, and Stephen (Samantha) Johnson; great-grandchildren, Robert and Russel McCracken, Hayden, Reid, and Grant Russel, Jack, Luke, Drew and Penny Miller, Samantha, Morgan, Ethan and Lauren Johnson, Allie, Kaylee, Lily, Faith and Braxton Johnson; step-granddaughters, Jackie Poole and her daughter, Everly and Amanda Gist and her son, Maverick; as well as numerous nieces, nephews, and extended family members. Those greeting him in Heaven are his wife, June; Jack’s companion for 23 years, Donna Poole; parents, Robert and Eva; a son-in-law, Ron Bergdale; and Jack's siblings, Tiny, Glen, Betty, Bob and Bill.

Jack D. Russel, 98 of Mason City, passed away Friday, August 6, 2021 at the IOOF home with family at his side. A Celebration of his life will be held 11:00 a.m Wednesday, August 18 at Hogan-Bremer-Moore Colonial Chapel, 126 3rd St. NE, Mason... View Obituary & Service Information

The family of Jack Dean Russel created this Life Tributes page to make it easy to share your memories.

Send flowers to the Russel family.