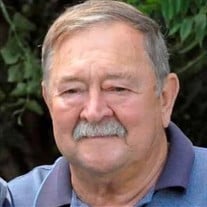 Jack Oliver Piper, 85 of Mason City passed away peacefully Thursday, January 20, 2022 at his home in Mason City. Funeral Services will be held at 10:30 a.m. Friday, January 28, 2022 at Hogan-Bremer-Moore Colonial Chapel, 126 3rd St. NE, Mason City, IA. He will be laid to rest at Memorial Park Cemetery in Mason City. A livestream of the service will be available on our Facebook page: https://www.facebook.com/HoganBremerMooreColonialChapel Visitation and public viewing will be held from 4:00 p.m. to 7:00 p.m. Thursday, January 27, 2022 at the funeral home. Jack Oliver Piper was born September 12, 1936 in St. James, MO, the son of Charles R. and Vivian L. (Nutting) Piper. Growing up on the family farm in Missouri, Jack graduated from John F. Hodge High School. He served in the United States Army for two years before his honorable discharge. On November 22, 1959 Jack married the love of his life, Grace True and the couple was blessed with four children, Chris, Todd, Vickie and Bradley. The family made their home in Mason City where Jack worked for the Northwestern States Portland Cement Company for 33 years. After coming out of retirement he worked at Fieldstone Cabinetry for some time and then Woodharbor Molding and Millworks before officially retiring again. Jack was a skilled handyman who tinkered and dabbled in just about everything. From stock cars and construction to barber chairs and hydraulic jacks, if it was broken, Jack could fix it. After work he could often be found in the garage, working on his next project. Jack and his family enjoyed camping and traveling all over the state and surrounding area: fishing, tubing, riding mopeds, and creating their own fun. He was a kind, strong, soft spoken man who never sought out recognition for his good deeds. Jack worked hard at everything he did and always followed through. He worked to pass on these same expectations to his children. He and Grace were dedicated, strong parents that taught their children how to be dedicated parents. Those left to cherish his memory are his beloved wife of 62 years, Grace; children, Todd (Tina) Piper of Sedalia, CO, Vickie Piper of Mason, City, and Bradley (Scarlett) Piper of Lincoln, NE; grandchildren, Michael (Jolene) Piper, Melissa Piper, Scottie (Mary) Vollrath, Danielle (Kraig) Bolte, Andrea Piper, Rachelle Piper, Brock Piper, Whitney (Aaron) Korger, Elliott Piper, Adam (Paige) Piper, Avery (Tember) Piper; many great grandchildren; as well as numerous extended family members and friends. Preceding him in death are his parents, Charles and Vivian; son, Chris Piper; siblings, Tip Piper Sr.,Maxine Haines, and Pearl McWhorter.

The family of Jack Oliver Piper created this Life Tributes page to make it easy to share your memories.

Send flowers to the Piper family.