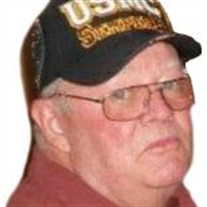 Jack Edwin Bahnsen passed from this earthly life on August 30, 2021, due to cancer. A celebration of Jack's life will be held from 11:00 a.m. to 3:00 p.m. Sunday, September 5, 2021 at Boulder Park, North Boulder Avenue, Nora Springs, IA. Jack was born to Ralph and Katherine (Deets) Bahnsen on April 24, 1946. He joined his sister, Kaye, and brother, Jerry, with a sister, Penny, completing the family 16 years later. Jack completed his education, graduating from Nora Springs-Rock Falls High School. He was a proud Vietnam Veteran who served in the Marine Corps for four years. After the service, Jack enrolled at NIACC and was part of the drama department performing in Mr. Rogers. Jack was a long-time employee of the Northwestern States Portland Competent Plant. He enjoyed his last 13 years of retirement. Jack was well known for his sense of humor and ability to tell a joke like no one else. Jack and Patty loved to camp and spent some time traveling. You could also find him enjoying a cold one at the local watering hole with his many friends. Jack had a great love for animals, especially his little dachshund, Ralphie, who recently passed over the rainbow bridge and was there to greet Jack. Also there to greet Jack was his stepson, Aron Bierl. Those left to cherish Jack's memory are his wife of 4 days, Patty Bierl; his brother, Jerry (Valarie) Bahnsen of Anoka, MN; sisters, Kaye (Jack) Rodemaker and Penny (Curt) Summers both of of Ocala, FL; a daughter, Katherine (John) Allen of Blaine, MN; stepdaughters, Emilee an Sara; many beloved grandchildren and one great-grandson; as well as numerous nieces, nephews, and extended family members. Preceding him in death are his parents, Ralph and Katherine. A very special thank you to MercyOne North Iowa Hospice as well as Jack's doctors and the Veterans Administration. The family would like to especially thank Kathy Tresemer, Kimmie, Brad Tresemer and Rick Koresh for their selfless, unsolicited 24 hour care of Jack.

The family of Jack Edwin Bahnsen created this Life Tributes page to make it easy to share your memories.

Jack Edwin Bahnsen passed from this earthly life on August 30,...

Send flowers to the Bahnsen family.