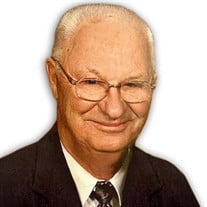 Northwood - Irl Palmer Madsen, 91, of Northwood passed away August 8, 2021 after a lengthy illness. A family graveside was held at North Shell Rock Cemetery, rural Northwood, IA. Irl P. was born in Worth County, IA on April 9, 1930, the last of seven children to Peder and Ida (Loken) Madsen. Irl graduated from Northwood High School in 1948 and began working at Wilson & Company in Albert Lea, MN. He entered the US Army in September 1951 and served in Europe as a Combat Medical Specialist. After his honorable discharge in August 1953, he returned to Northwood, to his childhood home and began farming, raising a variety of crops and livestock, his vocation for the next 60 years. Irl married Beverly Norland on January 9, 1954, and during their 67 years of marriage they raised five children and helped raise 19 grandchildren and 26 great-grandchildren. Irl was above all else a great husband, father, and grandfather. He made certain to attend every possible event his children and grandchildren were involved in, from school music concerts to athletic contests. Irl was also interested in soil conservation and was an early adopter of ridge tilling. He served terms as a Township Trustee and as a member of the Worth County Co-op Oil Company board. In addition, Irl served as a member of the Worth County Historical Society and was a member of the Fraternal Order of Eagles. Irl is survived by his wife, Beverly of Northwood; children, Ellen (Larry) Chodur of Rudd, Scott (Deanna) Madsen of Northwood, Susan Madsen (William Gansemer) of Mason City, Wayne (Kathy) Madsen of San Angelo, TX and Alice (Scott) Swehla of Claremont, CA. Irl’s family would like to thank all of the wonderful caregivers from Embrace Home Care, Hospice of North Iowa, and Worth County Public Health who assisted Irl and the family during his illness. Conner Colonial Chapel. 1008 1st Ave S. Northwood, Iowa 50459. (641) 324-1543. ColonialChapels.com

The family of Irl Palmer Madsen created this Life Tributes page to make it easy to share your memories.

Send flowers to the Madsen family.