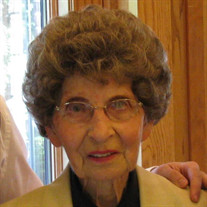 Irene Trampel, 95, of Mason City, passed away Thursday, January 7, 2021 at Summit Pointe Assisted Living Community in Marion. A private funeral Mass will be held at Epiphany Parish – St. Joseph Catholic Church, Mason City. Burial will follow in Elmwood St. Joseph Cemetery, Mason City. The daughter of John and Florence (Matter) Lansing, Irene was born on December 13, 1925 in Mason City. She was raised in Mason City, attending and graduating from Holy Family Catholic School. Irene met Elmer Trampel while attending a dance at the Surf Ballroom in Clear Lake. On February 10, 1948 they were united in marriage at Holy Family Catholic Church. Together they would be blessed with two children and nearly 65 years of marriage. Elmer preceded Irene in death on November 30, 2012. For many years Elmer and Irene lived outside of Dows and Alexander where they were Holstein dairy and grain farmers. Following their retirement in 1998 they moved to Mason City. Elmer and Irene never lost their love of dance; and enjoyed traveling to ballrooms across the Midwest. Irene was also an active volunteer at MercyOne North Iowa where she served as a Mercy Ambassador. Those grateful in sharing in Irene’s life include her children, Michael (Pat) Trampel and Mary Kay (David) Allen; grandchildren, Crystal (Chris) Van’t Hof, Rachel (Joe) Sobieck, Kaitlyn (Philip) Weinert, Nathan (Jessica) Allen and Holly(Trevyn Cunningham)Allen; sister, Sharon (Jerry) O’Neill; and three great grandchildren as well as several nieces, nephews, and extended relatives. Irene is preceded in death by her husband, Elmer; her parents, John and Florence Lansing; and her brother, Leonard Lansing. In lieu of flowers and customary remembrances, memorials may be left in Irene’s honor to the Surf Ballroom, Good Shepherd’s Telephone Reassurance program, or Epiphany Parish.

The family of Irene Trampel created this Life Tributes page to make it easy to share your memories.

Send flowers to the Trampel family.