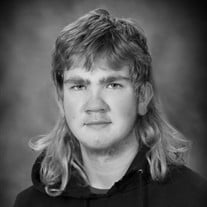 Ian H. Husske, 16, of Northwood left this world too early on Friday, October 16, 2020 when he took his life. If you or someone you know needs help: 1-800-273-8255 is the National Suicide Hotline or you can text HOME to 741741 to chat with someone. A memorial service will be held in his honor 10:30 Saturday, October 31, 2020 at First Lutheran Church, 309 9th St N, Northwood, IA 50459 with Rev. Becky Sogge officiating. Burial will be in Sunset Rest Cemetery, Northwood, IA. The family asks that casual attire be worn. A Memorial visitation will be held from 4:00 p.m. to 7:00 p.m. Friday, October 30, 2020 at the church. Visitation will also be held one hour prior to the funeral. Masks and social distancing will be required in the church. The funeral will be live streamed here: https://www.facebook.com/flcnwdsundayschool/ Ian Hunter Husske was born August 2, 2004 in Albert Lea, the beloved son of Andrew and Nicole (Walton) Husske and brother of Tyler. He was baptized beside his dad, Andrew, and later confirmed at First Lutheran Church. He grew up in Northwood, and had begun his sophomore year at Northwood-Kensett High School. Ian had many beloved friends whom he enjoyed spending time with: whether it was playing Magic, Pathfinder, video games or just being together. Youth Group at First Lutheran was a very special place for Ian. The group and Mark were a huge part of his life and Ian thoroughly enjoyed the trip to Life Fest with them. For many years Ian played in the band, beginning with the baritone and eventually graduating to the tuba. He had taught himself how to play the bass guitar and was excited to be able to add it to the band's repertoire. Spending time tinkering with cars alongside his Uncle Benjamin brought him joy and had him considering entering the Automotive program at NIACC. Ian enjoyed time spent with his Grandpa Husske wood working and creating things with their own hands. Though often outspoken, Ian was very opinionated. The blue lights displayed on porches around Northwood honoring police and law enforcement inspired him. The Worth County Izaak Walton League was a staple in Ian's life. He enjoyed trap shooting and archery and looked forward to open shooting. For many years he dedicated time to volunteering and helping at meets and truly enjoyed meeting and interacting with the people who came. The family would like to express their most sincere gratitude to the EMTs, Sheriff's department and all other first responders who cared for the family in the wake of tragedy. Your kindness and compassion will not be forgotten. Ian left behind his parents, Andrew and Nicole Husske of Northwood; his brother, Tyler Husske; uncle, Mason (Sarah) Walton and their family, Stephanie and Andrew; uncle, Benjamin "Ben" Walton and his children, Sidney, Brett (Natasha) and Olivia; aunt, Heather (Kevin) Kiewitt and their family, Amanda (Doug), Alexis (Brandon), Alivia, Brielle, Brooklyn and Brock; uncle, Shane (Tammy) Walton and their son, Blake; grandparents, Bruce Husske of Northwood and Micheal and Laura Walton of Joice; great-grandmothers Carol Farrell and Eva Chesmore; as well as numerous friends and extended family members. Greeting him in Heaven are his grandmother, Bobbi Husske; great-grandfathers, Donald Farrell, Robert Walton and Kenny Chesmore; aunt, Allison Beck and uncle, Brent Walton. Conner Colonial Chapel. 1008 1st Avenue South, Northwood, IA 50459. (641) 324-1543. ColonialChapels.com

The family of Ian Hunter Husske created this Life Tributes page to make it easy to share your memories.

Send flowers to the Husske family.