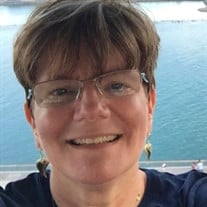 Heidi T. Allen, 63, of Mason City, passed away, Tuesday, December 1, 2020 at home in Mason City. She fought a courageous battle against endometrial cancer after an earlier fight against colon cancer. A memorial service will be held at a later date. Memorial contributions may be directed to Hospice of North Iowa, Mason City. Heidi was born June 22, 1957 in Tuxedo, New York, daughter of Joseph and Rosemarie (Steger) Thompson. She attended Monroe – Woodbury High School, class of 1975. Heidi furthered her education at Carleton College in Northfield, Minnesota attaining her BA in History, and then earned an MBA in Finance at the University of Minnesota. In 2018, she earned the Chartered Property Casualty Underwriter Designation “CPCU”. Heidi was united in marriage on July 15, 1995 to Dan Allen and to this union one daughter was born, Hannah Allen, and later separated. She worked at Pharmacists Mutual Insurance Company in Algona, Iowa, for over seventeen years; currently as Vice President of Product Development. Heidi attended Grace Church in Mason City. Heidi looked forward to her weekly Bible study group meeting Heidi enjoyed traveling with her daughter on the many road trips around the country and the trip to UK. Heidi loved attending concerts with Hannah. Heidi had a big impact on Hannah’s friends and they viewed her as a second mom. She liked to knit various items for Hannah, friends and family. She will be remembered for her Christmas cookies and the Thanksgiving stuffing from her mom’s recipe. Heidi is survived by her daughter, Hannah Allen of Mason City; siblings, Joseph (Karen) Thompson, Jeffrey Thompson and Rhett Thompson; step children, (Dan’s children) Jessica (Justin) Hoeppner, Bo (Jenny) Allen and Travis (Katie) Allen and families. She is preceded in death by her parents, Joseph and Rosemarie Thompson.

Heidi T. Allen, 63, of Mason City, passed away, Tuesday, December 1, 2020 at home in Mason City. She fought a courageous battle against endometrial cancer after an earlier fight against colon cancer. A memorial service will be held at a later... View Obituary & Service Information

The family of Heidi T Allen created this Life Tributes page to make it easy to share your memories.

Send flowers to the Allen family.