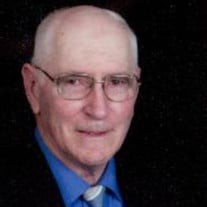 Harvey D. Alitz, 83, of Mason City died Thursday, April 1st, 2021 at North Iowa Hospice Muse Norris Inpatient Unit surrounded by family after a long courageous battle with health issues. There will be no service at this time. The immediate family will join together for remembrances & a celebration of life. Harvey, the son of Henry & Clara Alitz was born on April 27th, 1937 in Worth County. He attended & graduated from Plymouth School in 1955. On April 22nd, 1959 he married THE LOVE OF HIS LIFE, Elaine Anderson in Mason City, Iowa. They lived all their married life in Plymouth & Mason City where they raised five children, Diane, Duane, Darrell, Deb & Doug. Harvey worked on the farm for the majority of his adult life before retiring in the late 1990’s. Harvey’s persona was that of a quiet man. A shy man. But those who knew him well knew a funny, outgoing, softhearted, generous, happy go lucky, laid back, story telling, give his shirt of his back, family loving man. He loved being surrounded by family & friends & sharing stories of times gone by & the more excited he was the louder his voice would get. He was a no frills kinda guy who enjoyed nothing more then spending all of his free time with family including weekends, holidays & vacations. He was loved & respected by his children & family & will be so dearly missed! Harvey’s family is comforted knowing that he is now reunited with his wife, Elaine, of nearly 60 years & is touching the face of his Savior. He is now safe. He is now HOME! Harvey is survived by five children, Diane Alitz of Mason City, IA, Duane (Barb) Alitz of Albert Lea, MN, Darrell Alitz of Mason City, IA, Deb (Tim) Thompson of Mason City, IA, Doug (Laura) Alitz of Mason City, IA, 7 Grandchildren, Ryan (Cassandra Anderson) Alitz of Mason City, IA, Travis (Jessica) Alitz of Albert Lea, MN, Amanda Alitz, Taylor (Megan) Thompson of Altoona, IA, Casey (Chelsea Smith) Thompson of Ankeny, IA, Coty (Breanna) Thompson of Ankeny, IA and Spencer Alitz of Mason City, IA; 9 Great Grandchildren. He is also survived by his brother in law, LaVern (Sheryl) Anderson of Lake Mills, IA. He was preceded in death by his wife, brothers and sister and parents.

Harvey D. Alitz, 83, of Mason City died Thursday, April 1st, 2021 at North Iowa Hospice Muse Norris Inpatient Unit surrounded by family after a long courageous battle with health issues. There will be no service at this time. The immediate... View Obituary & Service Information

The family of Harvey D. Alitz created this Life Tributes page to make it easy to share your memories.

Send flowers to the Alitz family.