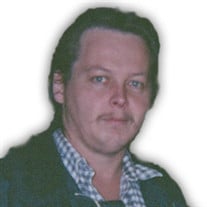 Harold Thane Edwards, 55, died peacefully with his family at his side on Monday, November 1, 2021, after a 15 year battle with Diabetes. A Public Visitation will be held from 2:00pm to 4:00pm on Sunday, November 7, 2021, at Sheckler Colonial Chapel, 114 N Hawkeye Ave, Nora Springs, IA. A Graveside Service will be held the following morning at 10:00am, November 8, 2021 in Memorial Park Cemetery, 11495 265th St, Mason City, IA, . Harold was born on October 24, 1966, the son of Harold Allen Edwards and Margaret Ann Edwards. He attended Nora Springs Schools and Craft School in Denison, Iowa. In his younger years he was a stonemason and could do a multitude of things. If there was something he wasn’t sure how to do he would take the time to listen and learn from someone that did know. His main love was his son, Jericho, but family and friends were not far behind. His many friends cared for him as much as he cared for them. Harold enjoyed working with his brothers on any roofing or building projects they had going on. Harold loved to build things, as it was evident by the beautiful wood workmanship that his crafts had. Along with woodworking he was an adept mechanic. Those who knew Harold will remember him for his kind and generous heart, knowing that he would do anything for someone in need of help. Those left to cherish memories of Harold are his mother, Margaret Ann Shanks of Nora Springs, IA; brothers, Mark Allen and his wife Julie Edwards of Rudd, IA, and Bradley Dean and his wife April Shanks of Manly, IA; sister, Torie Ellen Kerchilech of California; son, Jericho Holt of Eldora, IA; as well as numerous nieces, nephews and great friends. Harold is preceded in death by his father, Harold Allen Edwards; his sister, Margaret Galena Edwards; uncle, Lawerence “Larry” Kiger; Aunt, Jeanette Bruhn; and a cousin, Shawn Wright.

Harold Thane Edwards, 55, died peacefully with his family at his side on Monday, November 1, 2021, after a 15 year battle with Diabetes. A Public Visitation will be held from 2:00pm to 4:00pm on Sunday, November 7, 2021, at Sheckler Colonial... View Obituary & Service Information

The family of Harold Thane Edwards created this Life Tributes page to make it easy to share your memories.

Harold Thane Edwards, 55, died peacefully with his family at...

Send flowers to the Edwards family.