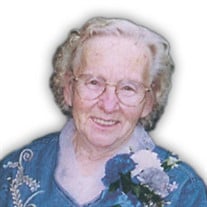 Goldia Fett, 95 of Nora Springs, passed away Tuesday, February 1, 2022, just two days shy of her 96th birthday, at her home in Nora Springs, with her son, Virgil, and his family by her side. A funeral service will be held 2:30pm Saturday, February 5, 2022 at Hogan Bremer Moore Colonial Chapel, 126 3rd St NE, Mason City with Goldie’s nephew, Pastor Terry Wilhite officiating. Burial will follow in Memorial Park Cemetery, Mason City. A livestream of Goldia’s service will be available through the Hogan Bremer Moore Colonial Chapel Facebook page. The daughter of Edward and Cora (Hughes) Unger, Goldia Maxine was born on February 3, 1926 near Corwith, Iowa. She grew up in the Corwith community alongside siblings, Hugh, Alice, and James. Goldia attended school in Corwith before furthering her education at Iowa State Teachers College. On March 16, 1945 she was united in marriage to Willard “Bill” Fett in Algona. Together the couple would be blessed with five children and nearly 55 years of marriage before Bill’s death in 2000. For many years Goldia and Bill farmed throughout north Iowa, she was always at Bill’s side, eager to help with whatever farm work needed to be done. Goldia also shared her love of learning with children throughout north Iowa. She taught in rural schools in Kossuth county until country schools faded away. She returned to teaching after her children were grown, first at St. Joseph Catholic School and then Sacred Heart Catholic School, in Mason City and Osage, respectively. Her final years of work were spent at the Nora Springs Public Library where she worked as a librarian for 10 years before retiring at age 65. In her free time Goldia loved reading and could almost always be found with a book in hand. She also loved to sew and crochet, traveling with Bill in their motorhome, and tending to her garden. Countless hours were spent at the family pond where she was able to make many memories with her family and friends. Throughout her life, Goldia always carried a love for chocolate and enjoyed a piece of Hershey’s chocolate daily. She is preceded in death by her parents, Edward and Cora; husband, Bill in 2000; grandson, Jesse Fett; and siblings, Hugh Unger, Alice Wilhite, and James Unger. Those grateful in sharing in her life are her children, Virgil (Vicky) Fett, Nora Springs, and their children, Billy (Connie) Fett, Nora Springs, and Kristy (Larry) Ausborn, Kensett, and their children, TeAnna, TJ, and Jessi; Juanita (Bob) Campfield, Gary (Pam) Fett, Robert (Deb) Fett, and Joseph Fett, and their families; daughter in law, Sandi Fett and grandchildren, Dionne and Buddy Fett; and special friends, Fred and Donna Julien; as well as nieces and nephews, extended family members and many friends.

Goldia Fett, 95 of Nora Springs, passed away Tuesday, February 1, 2022, just two days shy of her 96th birthday, at her home in Nora Springs, with her son, Virgil, and his family by her side. A funeral service will be held 2:30pm Saturday,... View Obituary & Service Information

The family of Goldia M. Fett created this Life Tributes page to make it easy to share your memories.

Send flowers to the Fett family.