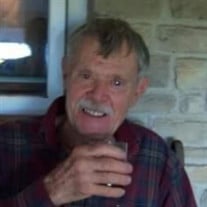 Glenn Arlo Evans, Sr., 89, of rural Plymouth passed away June 6, 2021, in the Hospice House of Mason City. Funeral Service will be held 11:00 a.m. Saturday, June 26, 2021, at Emmanuel Lutheran Church, 308 4th Avenue, Grafton, Iowa, with Rev. Paul Weeg officiating. Burial will be held after the service at Grafton Cemetery. Military honors will be conducted by the Grafton American Legion Post 616. A visitation will be held 5:00 p.m. to 7:00 p.m. Friday, June 25, 2021, at Emmanuel Lutheran Church, Grafton, Iowa. In lieu of flowers, of which he had thousands, especially his beloved hostas, please consider making a donation to the Cerro Gordo Dept. of Veteran Affairs, the Hawkeye Harvest Food Bank or the Salvation Army in Mason City. Glenn was born on January 12, 1932, to Meta Pagel Rothermel on his grandfather’s farm in rural Worth County, IA, near Grafton. He attended school in Mason City, and he was a member of Luther League and the Boy Scouts, and he taught swimming at the YMCA in Mason City. When he was a teenager, he visited Mexico with his troop. After high school, he attended the University of Iowa. After completion, he served in the Army during the Korean War, spending his leave in Japan. His love of travel took hold with those experiences, and from Mexico he sent the first of over 200 postcards to his family – he brought the world to them. After his discharge he attended SUI (now the University of Iowa) and earned both a B.S. and an M.A. degree in geography and geology. He taught these subjects to undergraduates. In 1956 he married Glenda Berryhill and started a family with four children: Michael, Glenn Jr., Patricia, and Carolynn. They lived in Plymouth and North Dakota and vacationed in Canada and the Florida Keys, in the seventies through the eighties. He made the Big Pine Key Fishing Lodge in Florida his home base for six months of the year and traveled internationally the rest of each year until he retired to his current home along the Shell Rock River near Plymouth . Glenn’s hobbies included hunting, fishing, collecting special rocks, searching for fossils, playing bridge (He was a Master), theater, travel, reading (He voraciously read almanacs and statistics), and gardening. He often gave garden clubs tours of his gardens, and twice he was written about in the Globe Gazette. In the 60s and into the 70s he volunteered more than 2500 hours for the VA. He also volunteered his time to the Salvation Army and supported Veterans Affairs. He loved sharing his hobbies with his grandchildren and taught them the importance of hard work which was always to be followed by fun. He is survived by his four children, eight grandchildren, and six (soon to be seven!) great-grandchildren. They are Mike (Marcia) Evans: Jennifer (Bryan) Jackson – Elliott & Oliver; Emily (Joel) Ostercamp – Kyle, Harper & Shaley; Amanda (fiancé Taylor) Evans; and Scott (Hannah) Evans; Glenn (Sarah) Evans Jr. : Glenn III & Ryan; Patricia (Greg) Whitfield – Megan Northway, Leman (Eve) Northway – Mason & Simon; and Carolynn; his sister Delores Miller; and sister-in-law Dorothy Evans. He also had a longtime friend Joan Gladwell who still lives in Big Pine Key, FL. He is also survived by his beloved cats, Mama Cat, Lucy and Golden Baby. He was preceded in death by his beloved Pagel grandparents; his mother and her husband Ivan L. Evans; his aunts, Louise and Erna Pagel; his brother Robert Ivan Evans; and his dear friend Beverly Wedeking. He wanted this to be shared with his family and friends: "A fond farewell from a man who loved flowers and faraway places."

The family of Glenn Arlo Evans created this Life Tributes page to make it easy to share your memories.

Send flowers to the Evans family.