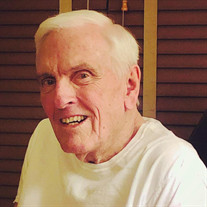 Glen Nelson Allen July 3, 1935 – July 29, 2021   Glen Nelson Allen, 86, was one of the greats…a loving father, grandfather and friend.  He was born to Esther (Nelson) & Harold Allen on July 3, 1935 in Mason City, Iowa.  Survived by his daughter, Jane Lafferty of Danville, CA and son Michael Allen (Jennifer) of Lake Oswego, OR and grandchildren; Ceara Lafferty, Conor Lafferty, Madison Allen & Luke Allen.  He is also survived by three generations of nephews and nieces who loved him dearly.  Glen was the youngest of three siblings, preceded in death by his sister Phyllis and his brother Richard.   Glen graduated from Mason City High School in 1953.  Shortly after graduating he enlisted in the Army and eventually served overseas, spending time in France.  After two years in the Army, Glen then came home to Mason City, IA and started his 59 year career in the dairy industry with State Brand Creameries, Inc.  He then went to work for Associated Milk Producers Inc. and was eventually transferred to New Ulm, Minnesota.  After three years in New Ulm, Glen joined his former associate, Walt Ingebritson, in San Francisco, CA at Far West Distributors and the family moved west.  The Allen family settled in Pleasanton, CA. Glen continued advancing his career, eventually becoming President and then part owner of Far West Distributors.  While Glen was incredibly hard working and driven, his career was not his only passion.  Glen loved golf, especially when he was with his son, Michael or his best friend, Larry.  He loved to travel, making multiple trips to visit Jane, Ceara & Conor when they lived in Rome, Italy.  He loved his Iowa Hawkeyes.  Family meant everything to Glen.  When the time came for him to move into an assisted living facility he chose to move to Oregon to be closer to Michael and his family.  He attended every basketball game, baseball game or dance recital he could.  When Jane moved back to California, she was up in Oregon every few weeks to take her dad on some adventure whether it was a family wedding, a trip to visit friends in California or just a tour of Oregon.  Glen was also a devoted friend who did so much for so many.  He will be deeply missed by his family, friends and all who knew him. Glen will be laid to rest at Elmwood-St. Joseph Cemetery in Mason City, IA in a private family graveside service. A Celebration of his life will be held in California at a future date. In lieu of flowers the family requests that you make a donation to your charity of choice in Glen’s name.

The family of Glen Nelson Allen created this Life Tributes page to make it easy to share your memories.

Send flowers to the Allen family.